Dinggedicht, defined by the Oxford Dictionary, is the German world for "a poem focused upon an object, though the object frequently fulfills a symbolic function."  Object poems, poems about things, originally seemed to focus on art objects, making ekphrastic poems. Now they focus on any simple object.  It can be a household object, a tool, a treasured object or a discarded or found one. The poet can convey a great deal with the very narrow focus of this form.


In the following example, Simic makes a familiar thing seem strange. The narrator in the poem could be Simic, or it could be a character that he has assumed. Description provides the main content of the poem.  Many object poems are in 'third person' or they take the voice of the object itself, but this poem is written with a 'second person' point of view.

This strange thing must have crept
Right out of hell.
It resembles a bird’s foot
Worn around the cannibal’s neck.
As you hold it in your hand,
As you stab with it into a piece of meat,
It is possible to imagine the rest of the bird:
Its head which like your fist
Is large, bald, beakless and blind.

Note that word "it" appears five times in this brief poem.  It is short and percussive. The poem is basically a simile, a poetic device that uses the words like or as to make a comparison. The fork is compared to a severed bird's foot, and then the head of the bird is compared to your fist. Some sound elements are the e sounds in crept, hell, neck, rest, head.  This is called assonance.  Simic has chosen not use a long vowel sound like an ō or an ā.  These long vowels slow down the sound and make words solemn or resonant.  It seems the short e sound and the mix of long i and short i sounds fit his image the best. Alliteration is also happening in the poem with b sounds: bird, cannibal, stab, bald, beakless, and blind. The last three fall in the last line and make a strong concluding phrase.

Simic's poem is obviously symbolic and somewhat ironic. Humans portray brutality here, and they are likened to birds of prey. I notice the contrast between the sharp claw of the bird, and the bald, beakless and blind fist. 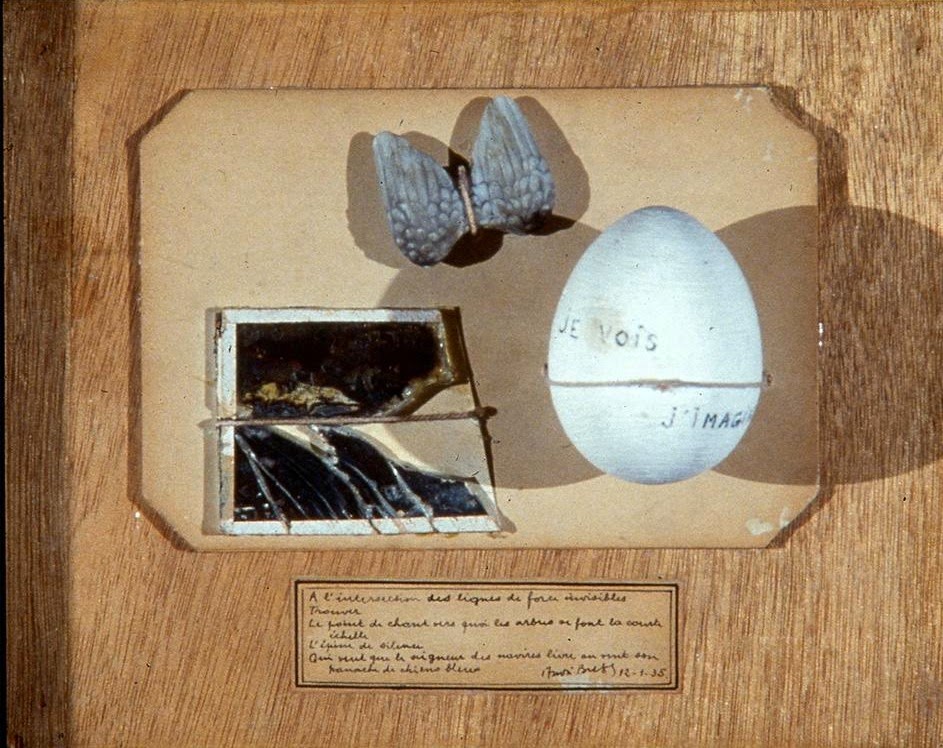 André Breton, a surrealist, made an interesting contribution to the form.  This image is one of his constructions, Poèm Objet, 1935. Collage of object and inscribed poem on card on wood.

The National Galleries of Scotland exhibits this fascinating art piece as his unique fusion of poetry and object. "Although not an artist himself, he was eager to explore any technique that required minimum artistic skill, such as the collages and assemblages. In 1924, Breton called for the creation of objects seen in dreams. He made about a dozen of his own assemblages in the 1930s and early 1940s, calling them ‘Poème-Objets’. The text on the plaster egg in this work translates as ‘I see / I imagine’ and the poem beneath is deliberately cryptic." The poem reads:

This is the translation:
At the intersection of invisible lines of force
To find
The focal point towards which trees give each other a leg up
The thorn of silence
That wants the lord of the ships to give the winds its panache of blue dogs

Curator’s Note: The poem was produced through automatism. It’s not “deliberately cryptic” per se; rather, it’s a confluence of consciousness.

In the creation of this Poem-Object, Breton preferred the subconscious imagery of dreams.  'Automatism' is a piece of writing that avoids or tries to avoid conscious thought in favor of language that has a wilder associative quality or an arbitrary or mechanistic method of combining images.  Ordinary thinking might travel along too well worn paths, and he was striving for originality.  At the same time that he was working on these, Carl Jung was writing about the collective unconscious, and French poets such as Verlaine and Rimbaud were exploring surrealist or exploratory methods in poetry.

Breton's poem engages. First it locates a place of energy. Then it presents a verb on one line, a transitive verb.   The next two lines begin with nouns, the focal point and the thorn.  The third is a restrictive clause that would seem to provide specific information about the thorn of silence.  It has images, it has movement, and it has mystery.  Stephan Mallarmé, a French symbolist poet said to be one of the major influences of surrealism, once said that good poems should hold mystery.  Symbolism, according to the Google Dictionary, is described as "an artistic and poetic movement or style using symbolic images and indirect suggestion to express mystical ideas, emotions, and states of mind. It originated in late 19th century France and Belgium, with important figures including Mallarmé, Maeterlinck, Verlaine, Rimbaud, and Redon."

These are good examples of "making" by two noteworthy poets. Both, the poem about an object and an object poem, use imaginative and startling juxtapositions to open a door.