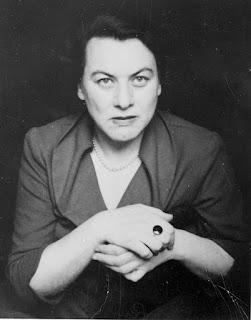 Not by evasion but by coming through

I celebrate what may be true beginning.

But new begun am most without resource

Stupid and stopped.      How do the newborn grow?

Pain strips us to the source, infants of further life

Waiting for childhood as we wait for form.

So came I into the world of all the living,

The maimed triumphant middle of my way

Where there is giving needing no forgetting.

Saw now the present that is here to say:

Nothing I wrote is what I must see written,

Nothing I did is what I now need done. –

The smile of darkness on my song and my son.

Have seen spirits now opened, surrounded as by sun,

And have, among limitless consensual faces

Materials of desire, that stone and wood and air.

Lit by a birth, I defend dark beginnings,

Declared and clear as the mortal body of grace.

Beginnings of truth-in-life, the rooms of wilderness

Where truth feeds and the ramifying heart,

Even mine, praising even the past in its pieces,

Muriel Rukeyser's poems are powerful and political. I used a line from her poem as an inscription to the book of poetry about the Iron Range.  "Let these roads take you into your own country,"  Rukeyser once said that the poem is like a theater. A line of a poem is a line of energy.

This poem captures an awakening, a new birth, and expresses awe in the moment its happening. The voice is personal, narrative. The form very much epistolary, a letter.  One thing that I find very interesting in the poem is the rhythm. It's conveys the sense of impediments. This is how one feels after coming through huge change or trauma that she names as a "three-kinded death."  In the first stanza, she conveys a sense of feeling stunned:

But new begun am most without resource

Stupid and stopped.      How do the newborn grow?

Pain strips us to the source, infants of further life

Waiting for childhood as we wait for form.

There is a need to understand the new shape of life, a pause.  We wait for form.

In the middle stanza, "So came I..."  is a reversal of the usual word order, and the first two syllables are emphatic. It's claims, declaims.  The voice is powerful.  After these words, two prepositional phrases, each with a longer breath line.  The second line of the poem has alliteration, the repeated m sound and the long a sound at the start and end are memorable.  There are stops and starts in the ensuing lines, syncopated rhythms, disruptions that seem to echo the content of the poem.

Nothing I wrote is what I must see written,

Nothing I did is what I now need done.

The anaphora structure, the same beginning on each line, and the end stops make this stand out. Often I've felt that the pandemic, the huge public health disaster, has changed the context of all of our lives. Lives are at stake.  Actions matter. Former worries seem paltry to the new worries: severe illness, possible job loss, loss of a loved one, isolation.  There is a need to evaluate one's normal activities up until January 2020, to reassess and change.  The world is a different place. It requires something different.

The last stanza conveys the sense of amazement and wonder. A dream grows and becomes real:

Materials of desire, that stone and wood and air.

New meanings arrive, a sense of relief or reckoning, another sense of connection to pieces of the past that brought one over obstacle or barricade. The ramifying heart: great word choice. It beats. No it is a battering ram. It breaks through.  "My tearflesh beckoner" is such a powerful image of grief and desire.

Beginnings of truth-in-life, the rooms of wilderness

Where truth feeds and the ramifying heart,

Even mine, praising even the past in its pieces,

It is a poem that expresses the moment, amid the long pandemic, a political victory hard won that brings integrity and compassion back to the White House.

Yet, citizens witnessed an attack on the US Capitol by our own citizens, people who have been fed fear-based propaganda and a lie about the election and it led to violence and five people dead, windows broken, lawmaker's threatened by white nationalists and extremists. What does it take to maintain a democracy?  It is not polarization, not propaganda, not efforts to ignore the voice of the people, the voters.  It takes the rule of law and leaders who have a commitment to the democratic institutions and to integrity. Transparency. Dialogue. Egalitarianism. It takes the truth.

Republican leaders now must decide how they will govern. They are at a crossroad. Fascism has been stopped, and they seem disoriented. "Stupid and stopped."  Will they remain silent? Will they go back to hostility, verbal attacks, red herrings, whataboutisms, oversimplifications and generalizations?

It's time for some critical thinking. "Nothing I wrote is what I must see written."  It's time to name the lie. Is it possible for them to confess how they spread the propaganda for their own profit or power?  They seem to be stuttering, fighting with each other for power, and anxious to put it behind without affixing consequences to Trump, without accepting responsibility for their own complicity. They must decide whether to operate under a mass delusion or to break that delusion.  I hope they get through this and return to egalitarian efforts. I hope they want to engage with voters of all races, of both genders, and understand that a government plays a necessary role to help the poor, to empower people, encourage each person to build skills and embrace opportunities.