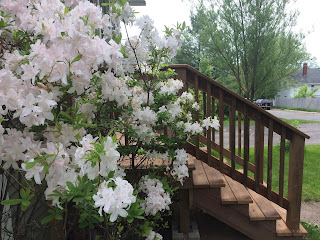 This is a story about revision. This is about fixing built things: re-arrangements, adjustments, and alignments.

Last week, a carpenter arrived to build a new set of steps for the front of the house. He had a pile of high quality lumber and good equipment. He did a great job, except the placement didn't look right. The post for the railing somewhat obstructed the flow out of the door, especially if one were to be carrying a couch, for instance.

This was only a matter of inches, but the stairs made everything wrong, even the door and  sidewalk. I contacted the contractor, and he agreed. Relieved that the contractor was on top of it, I tried to imagine the ways that they might move this heavy structure. Would they disassemble the solidly nailed steps? Would they use jacks to lift the stairs? Would they use a winch?  Would there be wheels involved? I had no idea. But I told myself they would know what to do. These were trained professionals with a lot of experience.

At 8:00 am the next day, the carpenter appeared with a helper.  I asked if it was difficult to move a set of stairs. "I have no idea!" they said. I laughed weakly. So. They had never done that mistake before. Oh dear.  Leaving them to their work, I went inside and then I left to run an errand. When I came back, it was done. The stairs were in perfect alignment and they were completely stable. Was it hard? I asked. The answer from the workmen: "No, surprisingly."

The next day, I was sewing a pair of linen pants. This was a very simple pattern for beginners, and I had experience with sewing. I made an adjustment to the pattern to add pockets. This didn't go well. Next, I sewed the front and back leg pieces wrong, and I had to do it over. The whole time, I was thinking about the carpenters. After I fixed the pockets, I moved on to the waistband.  I'd miscalculated and inadvertently shortened the rise.  I had to rip out the stitching and change the seam allowance, tricky because I had already reinforced the stitching four times. I'd spent $40 on the fabric, and it was beginning to look like I'd wasted time and money. At several points in the project, I almost threw the unfinished pants into the back of the closet. But I made myself continue. Suddenly, things came together. I can wear them. They even look professional.

Then I went to my manuscript in progress. I had hoped the stories would spring fully formed and perfect from the moment of inception. They didn't. I laid them out on the work table, my desk, and gazed from the window into the garden, not seeing the garden. The apple blossoms were falling, each leaving a small ovary, and these would soon swell. It did not look all that promising. I had no idea what to do, but this was no reason -- at all -- to quit. The answer will come in the completion.

Email ThisBlogThis!Share to TwitterShare to FacebookShare to Pinterest
Labels: revision

The Pleasure of the Text

Roland Barthes, in his book The Pleasure of the Text, posits writing as a form of seduction, and his form expresses his content. The book is a profound collection of fragments about pleasures of texts.  In the table of contents, instead of chapter titles or headings, there are key terms.  These are embedded in the paragraph fragments.  The first half of the list of terms are alphabetized and they are paired consecutive page numbers.  Not so random, those fragments. The second half of the list of terms have no page numbers at all, although the terms can be discovered within the book. His page numbers have set up an expectation, and then he interrupted or disrupted the expectation.  This is perhaps an example of what he terms "cruising" the reader. The key words from the second half of the list are in the text, and the reader must discover them. The following phrases express his metaphor:

...the cohabitation of languages working side by side...

...what happens to the language does not happen to the discourse: what "happens," what "goes away," the seam of the two edges, the interstice of bliss, occurs in the volume of the languages, in the uttering...: not to devour, to gobble, but to graze, to browse scrupulously, to rediscover...

The text needs its shadow: this shadow is a bit of ideology, a bit of representation, a bit of subject: ghosts, pockets, traces, necessary clouds: subversion must produce its own chiaroscuro.

...text is made, is worked out in a perpetual interweaving: lost in this tissue--this texture--the subject unmakes himself...

...Pleasure's force of suspension can never be overstated....

...the voice, that writing, be as fresh, as supple, lubricated, delicately granular and vibrant as an animal's muzzle...

And certainly, poetry that gives pleasure does all of this. In Barthes' arrangements, positions, and subversions, he revels in language. The book lingers, explores, slows, and penetrates.