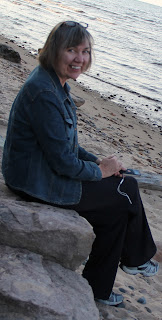 The Craft of Writing

The Craft of Writing, a conference sponsored by Wisconsin Writers Association, is happening on September 30 and Oct. 1, 2022 at Barkers Island Inn & Conference Center in Superior, Wisconsin. I'm on a panel "Tips and Tricks for Writing Across Genres" with four other great writers: Jan Jensen (fiction), Christy Wopat (nonfiction/memoir), Dale Botten (screenwriting), and Chris Monroe (children's book author/illustrator.   There are also wonderful presentations and opportunities to meet people and talk about the craft of writing.

Talking About A Poem 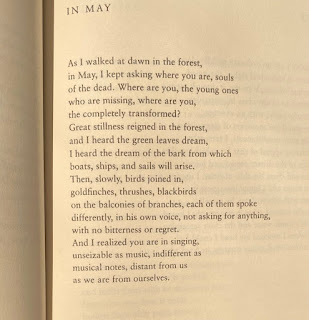 "I don't like poetry," some people say. Others say they don't understand it, and that's why they avoid it.

In this wonderful poem by Adam Zagajewski, the opening line immediately has a narrator ("I"), action, and setting. The I might be the poet himself, or it might be a persona that the poet has created for this narrative.  Ambiguity in a poem is common. It allows the reader to find more than one meaning.  "I" could even refer to the reader.

Then, the pronoun "you" refers to the souls of the dead. The poem appears to be addressed to the souls.  The narrator asks "where are you?" It is an existential moment, definitely.  After the question, the forest images predominate. Using figurative language, the narrator says, "I heard the green leaves dream./ I heard the dream of the bark from which/ boats, ships and sails will arise."  Figures of speech, or figurative language, is characteristic of many poems. Metaphors use one thing to explain something else.  Imaginative images and scenes like this give the reader a vision of time and beautiful transformations.  Then the birds come in "on the balconies of branches," each singing a unique song "...not asking for anything, with no bitterness or regret,/"  Here the birds are described in human terms.

Next, a turn. A leap. In a sonnet, this shift is called a volta. I like to think of this moment as similar to a bend in the river that brings you to a new vista.  It brings us to the ending: "I realized you are in singing..." The ending line has a new pronoun, not "I" or not "you" which have occurred in the earlier lines, but "we."  The word signals a shift. Now the narrator and souls are drawn together as a we, or perhaps it's the narrator and audience or readers that are drawn together.  It's a satisfying answer to the initial question.

Repeated words, phrases or images are important. Rhythm and sound are important, because all of this forms a kind of music. In this poem, it is a call and response form. "Where are you? ....Where are you?"  and "I heard...  I heard..."   and then, "...you (souls of the dead) are in singing,/ unseizable as music, indifferent as/ musical notes, distant from us/ as we are from ourselves."

Unseizable. A lovely word and a lovely rhythm in this phrase. Notice the line breaks. A line break does create a sort of pause, a hesitation, and here the line break that occurs after "distant from us" (of course, the birds are distant because they are far above and of course souls of the dead are far) does something new. There is a subtle shift, for the next line reads "as we are from ourselves." Now that's surprising. The poet is saying that we don't know ourselves, that we have parts of our being we cannot easily reach, and perhaps we cannot ever reach. The ambiguity expands meaning. He might mean himself, he might mean the reader.

A poem like this captures a moment, a place, and a person who has longing. It speaks of spiritual truths to the reader: we have loss, a connection to the souls of the dead. We have lost loved ones, friends, people in our community, and we have also been aware of an internal loss, the inability to know our own self, our connection to our own being.  The phrase "Where are you?" now takes on this new meaning.

In just a few lines on the page, this poem says so much concisely. The words and images have beauty.  One poet said that poems are made of forces.  If so, what are the forces operating inside this poem?  There are no definitive answers, no right interpretation or wrong interpretation, only things to ponder. There are impressions. Resonances. Echoes. There is breath. There is light and music.

To find out more about this poet, go to https://poets.org/poet/adam-zagajewski

Email ThisBlogThis!Share to TwitterShare to FacebookShare to Pinterest
Labels: adam zagajewski, analyzing a poem, How to Read a Poem

Looking forward to seeing my new work published by Wildwood River Press! Available August 2022! These poems travel through mining excavations and waterways vulnerable to environmental contamination and climate change in Minnesota, where the Northern Continental Divide crosses the Laurentian Divide and creates three watersheds that flow into the Mississippi River, the Great Lakes, and Hudson Bay. These are stories and images, historical and contemporary, about people who arrive or are displaced, whose language is replaced by another language, and who find a fluid space full of gaps, silence, and possibility.

The cover is an aerial image by Sara Pajunen, and the book design by Kathy McTavish.

“In Surface Displacements, the spirit of the ancient Finnish shamans breathes again. Sheila Packa’s best early poems recalled her youth on Minnesota’s Iron Range, growing up in households where Finnish was still spoken, where the immigrant towns were gritty working-class, in a landscape of mine pits, forests, and water. That environment remains her fundamental source, though now everything has changed, changed utterly, as Packa has learned, with increasing confidence, to incorporate history, science, and myth, even as her language has grown more musical, her poems more spiritual. Like the old shamans, she has become a shapeshifter, able — through the dreamy trance of poetry —to speak in the voice of a snail, rivers and lakes, an entire landscape and its people.” —Bart Sutter, author of So Surprised to Find You Here

“There is a beckoning, a teaching, a singing and lamenting in Sheila Packa’s Surface Displacements. In rivers, headwaters, displacement and the otherworld we are given ways of navigating earth’s trauma in the sink and rise of all that is broken, all that survives. Whispers, dialogues, and the power of forgotten language are forged in the stellar poetic title poem that speaks of both beauty and loss. This is an important book of place, that calls out truth, journeys into landscape, history and the natural world. Ancestry runs through this book as challenge and praise, a way of naming that offers “the tongue with the old root.” Packa dives into the body of language and voices the body of the earth with skill and relish. “To speak is to mend” is an invitation to us all in this intimate and compassionate calling out of the elegant and fragile wonders of this world.” —Diane Jarvenpa, author of The Way She Told Her Story and The Tender Wild Things

“Surface Displacements is a Lake Superior epic, an Iron Range chronicle, a Northland saga in which the human psyche merges with rock and water. This book has a heartbeat, and its rhythms are those of Great Lake seiches and flooded open pit mine waves. This poet’s practice is not only one of noticing but also of becoming, as self and landscape merge. Or perhaps it’s more accurate to say that humanity and geography have always been one, and Packa’s words remind us of what we know in our bones: that life is movement, displacement, and constant “shift(s) from state to state”; and also that we are connected to a core of belonging forged from earth and spirit. These gorgeous poems are incantations of legacy, deep roots, disturbance, destruction, flight, and transformation.” —Julie Gard, author of Home Studies

"Through the art of attention, Sheila Packa elevates the landscape of northern Minnesota to the holy. Each poem is a room rich with texture, imagery, and sound that resonates long after one puts the verses down. This is a book to simultaneously lose oneself and find oneself in." —Darci Schummer, author of Six Months in the Midwest

This book project, originally titled Three Rivers, was also made possible with the support of a grant in 2016 from Finlandia Foundation National, www.FinlandiaFoundation.org. Finlandia Foundation National invites applications for its grants program, which awards funds to projects related to Finnish-American and Finnish history, heritage, preservation, arts and culture.
Posted by Sheila Packa Poetry Blog No comments: