"Then let your rhythmical sense wind itself in and out among men and women, omnibuses, sparrows—whatever come along the street—until it has strung them together in one harmonious whole. That perhaps is [the writer’s] task—to find the relation between things that seem incompatible yet have a mysterious affinity...."  from A Letter to a Young Poet, 1932. 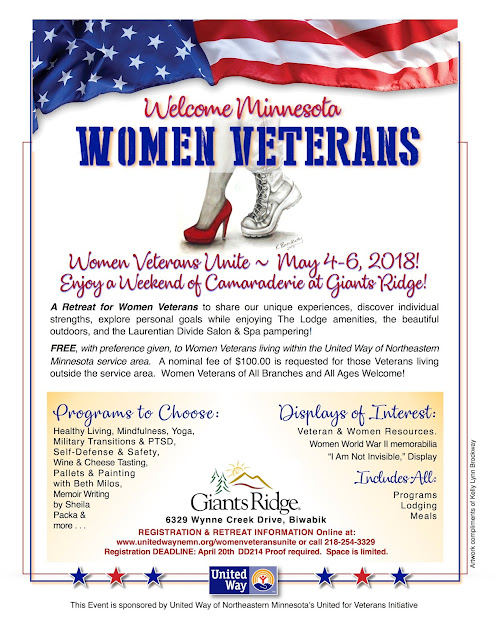 Women Veterans are invited to a retreat at Giant's Ridge in Biwabik.

Every veteran has a story to tell, and we welcome you.

Recently, the Washington Post reported the United States has 2 million women veterans, and once they are back from duty, their service is often unacknowledged or even forgotten in our culture. Their stories are just now beginning to emerge.

The fairy tales are enduring cultural narratives that have shaped every storyteller on earth. Bernheimer asks us to appreciate their qualities, which are not the qualities often celebrated or taught in creative writing classes. She says they have "four elements [in]  traditional fairy tales: flatness, abstraction, intuitive logic, and normalized magic."   She goes on to explain these four characteristics:


Fairy-tale characters are silhouettes, mentioned simply because they are there. They are not given many emotions—perhaps one, such as happy or sad—and they are not in psychological conflict.

So, it is curious that we are so deeply imprinted by these characters.


Fairy tales [often tell not show]…rely on abstraction for their effect. Not many particular,
illustrative details are given. The things in fairy tales are described with open language.

Often called "just-so" stories, fairy tales relate events that would seem to have no connection, that are outside of concepts of cause/effect, commonly thought of as plot.


The language of traditional fairy tales tells us that first this happened, and then that happened. There is never an explanation of why. In fact the question why does not often arise....

The natural world in a fairy tale is a magical world. The day to day is collapsed with the wondrous. In a traditional fairy tale there is no need for a portal. Enchantment is not astounding. Magic is
normal.


I am silver and exact. I have no preconceptions.
Whatever I see I swallow immediately
Just as it is, unmisted by love or dislike.
I am not cruel, only truthful-
The eye of the little god, four cornered.
Most of the time I meditate on the opposite wall.
It is pink, with speckles.
I have looked at it so long
I think it is a part of my heart.
But it flickers.
Faces and darkness separate us over and over.


This poem alludes to the queen's words, mirror, mirror on the wall, who is the fairest of them all? Fairy tales are a rich source of material for all poets. 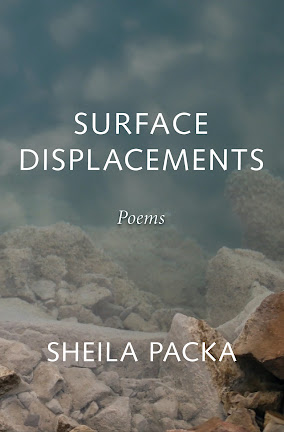