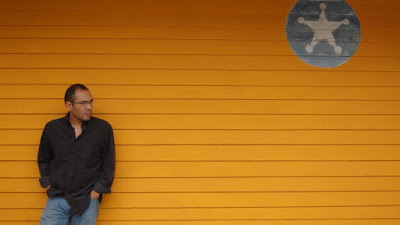 One of the most interesting novelists I've read lately is Yuri Herrara. His three books, termed "nuevo noir" seem to capture today's most perilous situations. W.S. Lyon writes "his real subject is border condition, a state of exile, an existence between two extremes—this side and the other side, narco and gringo, life and death." His three books are Signs Preceding the End of the World, The Transmigration of Bodies, and Kingdom Cons. Herrara says:

...the protagonists in all three novels are what I would call “border characters,” though not only in the sense that they live on the actual physical border between two countries; they share the border condition, which is any situation where you have different individuals and different communities exchanging values, exchanging goods, always in conflict but also in different levels of dialogue.

I make a lot of lists before I prepare a book: lists of stories, lists of words I like, lists of words that I won’t use. That last one might be the most important list, and that has to do with the need to avoid cliches, to not repeat certain predigested concepts in place of problems or emotions that are much more complex than those concepts. So, the list of words I refused to use in Kingdom Cons included “Mexico,” “United States,” “border,” “drugs,” and “narco trafficking.” And that wasn’t enough to avoid being called a writer of narco novels, which is fine, since once a book is out there the readers can find different ways of reading it, but I think that’s not the only possibility.

Herrara distills different cultures, languages, and experience, using words or phrases from each. Aristotle wrote in Poetics: "Every word is either current, or strange, or metaphorical, or ornamental, or newly-coined, or lengthened, or contracted, or altered." This seems to be the case with Yuri Herrara's language. His translator Lisa Dillon writes of Herrara's unique patois — a language made from a mix of places and traditions and ways of being. He teaches at Tulane University, but he writes his novels in Spanish. It was a challenge for her to find the most accurate translation for his neologisms. Herrara uses an invented word for walking, traveling, crossing. Brilliantly, the translator uses the word "versed.


One feels the archetype in these stories, yet they do not seem facile or contrived. There is violence all around the main character, and he or she must walk through it as in order to complete his or her assigned errand. In The Transmigration of Bodies, the protagonist is a "fixer," a go-between between rival gangs, who must collect the body of a beautiful young woman and return it to her family. This exchange occurs amid a mysterious epidemic.

In Signs.., the protagonist Makina is a young woman whose grandmother sends her on a journey across the border from Mexico to the United States to look for her brother who has disappeared. This story evokes the journey through the underworld as she meets and deals with various narcotics dealers, criminals, and coyotes. These figures evoke underworld gods. In fact, Aztec mythology underlies this novel. "Each chapter title taken from the name of a layer of Mictlan—we see the Mexica world itself being reborn, with no memory of itself, out of a place of silence." Makina is an interpretor, a conduit of messages, a telephone operator in a town with few phones.

In Kingdom Cons, a street musician is suddenly lifted up from his poverty by a drug kingpin who likes his music. He lives within the narco's luxurious compound and writes and performs music to an audience of connivers and underground operators of all kinds. It is a scenario which might be characteristic of a jester or minstrel in a king's court. He tries to maintain loyalty but he is swept into assisting an escape of the wealthy man's daughter.
Herrera's three small novels form a trip-tych. Despite the diverse characters, they capture a harrowing between-world experience and do so with a lyrical, spare writing style that evokes so much more than what is on the page.

For more about Yuri Herrara:

Notes from his translator, Lisa Dillman