Poets at Duluth's All Souls Night with Mary Plaster 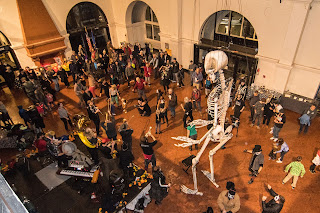 Mary Plaster, visual artist and puppet master, is the creator of the large scale puppets, and she is the force behind the annual All Soul's Night in Duluth. It's on Saturday, November 10, 2018 at 4 PM – 9 PM at the Historic Union Depot
506 W Michigan St, Duluth, Minnesota 55802

At All Soul's Night, see the memorial altars created by artists, the giant puppets, music performances, and the burning of bad ideas. The Spin Collective will be performing. This group of women work with fire batons and chains to create mesmerizing and dazzling experiences. For more information, see the Facebook post https://www.facebook.com/events/438888109955964/

The Duluth Playlist on WDSE Channel 8 in Duluth featured an artist's profile and art-news about Mary Plaster and her mixed media art. See it here: 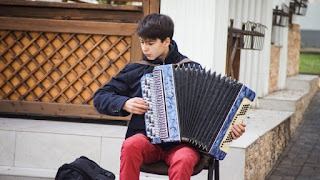 My piece, "Soliloquy," is a biographical story featured in their October 2018 issue, here:
http://unbrokenjournal.com/2018/10/soliloquy/

A prose poem is a hybrid form. It looks like prose, but it uses techniques of poetry: sound patterns, figurative language, and compression.  Unbroken Journal is an online literary magazine that publishes prose poems.

This is a story about my Finnish immigrant grandmother who couldn't speak English. She wouldn't speak English, my aunt says. The word soliloquy comes from the Latin word solo, which means “to himself,” and loquor that means “I speak.”  I was inspired by watching a beautiful video entitled "Soliloquy," created by Iranian/American Shirin Neshat and exhibited at the Walker Art Museum in 2018.  The installation was a split screen arranged at opposing points in the room, and on each screen a woman gazing, entering doors, ascending stairs, going through the streets. Each was the same woman, in the same Istanbul, but one was contemporary and the other,  ancient. They were facing each other, but not seeing each other.  There was a quality of haunting or being haunted by the future or past. The subject was about place, about spirituality, about culture and gender.

This provoked thoughts of my grandmother and me, she in one language and I in the other. She was rural, and I was not.  Her life seemed traditional and mine, not traditional, and yet we are intimately connected by blood.  We looked at each other's lives, and I thought of hers as unimaginable, impossible. She passed on thirty-five years ago.  I wondered what she would see if she could see me right now.  I wondered what I can see of my small grandsons lives in the future. What would our differences be? What would be our possibilities?

In a description of Shirin Neshat's work at the Tate Museum:


Since the early 1990s she has travelled frequently to Iran, and Soliloquy is a comment on Neshat’s experience of living between two cultures. She has said of the piece, ‘although Soliloquy was not a biographical piece, it is based on my personal experience ... those of us living in a state of the “in between” have certain advantages and disadvantages."

To grow up between two languages and two cultures is a unique experience. I was not able to grasp the second language although its sound and rhythm was and continues to be familiar, continues to evoke the joy of childhood.  The place of between-ness is full of shadows. There is language, and the language is more music than meaning. Things approach but not emerge. There were secrets in the family that my mother and aunts refused to talk about; these secrets are one of the forces in the poem.

In this excerpt from "How Doctors Use Poetry" by Danny Linggonegro
September 27, 2018:

Researchers have demonstrated with functional magnetic resonance imaging that reciting poetry engages the primary reward circuitry in the brain, called the mesolimbic pathway. So does music—but, the researchers found, poetry elicited a unique response. While the mechanism is unclear, it’s been suggested that poetic, musical, and other nonpharmacologic adjuvant therapies can reduce pain and the use and dosage of opioids.

One randomized clinical trial by researchers at the University of Maranhão studied the effect of passive listening to music or poetry on the pain, depression, and hope scores of 65 adult patients hospitalized in a cancer facility. They found that both types of art therapy produced similar improvements in pain intensity and depression scores. Only poetry, however, increased hope scores. The researchers conjectured that poetry can break the so-called law of silence, according to which talking about one’s perception of illness is taboo. After listening to poems from Linhas Pares by Claudia Quintana, one participant said “I feel calmer when I hear those words. That agony, that sadness passes. They are important words, they show me that I’m not alone.”