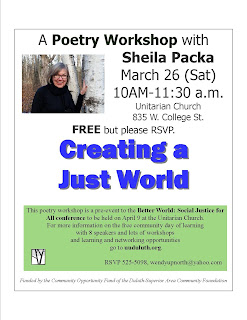 Can poetry instigate change? Yes it can, in many ways. Here are some excerpts of poems from poets whose work has had political influence. Some of these poems are visionary, some are poems of grief, and some are satire. At the workshop, using prompts and guided writing exercises, participants will explore their own concerns and vision for a better world.  Che Guevarra said, “At the risk of seeming ridiculous, let me say that the true revolutionary is guided by great feelings of love. It is impossible to think of a genuine revolutionary lacking this quality.”

Neruda wrote poems that were political in order to trigger social change.  He also wrote love poems and poems of all kinds.
...


He or she who does not turn things topsy-turvy,
who is unhappy at work,
who does not risk certainty for uncertainty,
to thus follow a dream,
those who do not forego sound advice at least once in their lives,
die slowly.

Ginsberg addresses America in this poem (anaphora: the list structure with a repeated beginning word). His perspective was from a radical, gay poet. Often the "you" in his work was a large audience.


...
America stop pushing I know what I’m doing.
America the plum blossoms are falling.
I haven’t read the newspapers for months, everyday somebody goes on trial for murder.
America I feel sentimental about the Wobblies.
America I used to be a communist when I was a kid I’m not sorry.
I smoke marijuana every chance I get.
I sit in my house for days on end and stare at the roses in the closet.
…
I have mystical visions and cosmic vibrations.
America I still haven’t told you what you did to Uncle Max after he came over from Russia.
I’m addressing you.
…
America I’m putting my queer shoulder to the wheel.


do not speak to me of martyrdom,
of men who die to be remembered
on some parish day.
i don’t believe in dying
though, I too shall die.
and violets like castanets
will echo me,
yet this man,
this dreamer,
thick lipped with words
will never speak again
and in each winter
when the cold air cracks
with frost I’ll breathe
his breath and mourn
my gunfilled nights.
he was the sun that tagged
the western sky and
melted tiger-scholars
while they searched for stripes.
...

In satire, Lockwood takes on the culture and women's issues.

These poets are but a small sample of poets who seek to make a difference in the world, to bring about peace and justice. Poet Stacy Ann Chin created a No H8 project with her young daughter. Speaking about raising her daughter Zuri, Stacey Ann Chin said,


“I want her to know that what she believes, what she says and what she does matters in terms of what the world will look like tomorrow. Protest is everywhere and protest itself is not violent in nature — it is being involved in a conversation," says Chin. "I want my kid involved in those conversations, and I want her to know she is extraordinarily powerful. What better way to feel powerful than to be involved with an ongoing conversation about what’s going to happen with the world?”


Poets bring an extraordinary attention to language and sound.  Who else can better articulate the vision of a better world?

To read an interesting essay about the function of poetry, see http://www.poetryfoundation.org/poetrymagazine/article/178919

Here are the names of a few poets of note who have worked to build a better world: 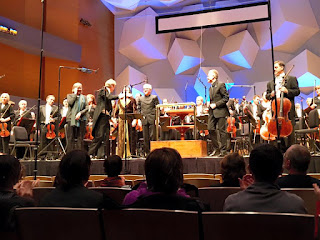 After the performance, I'm back at my desk.  The Duluth Reader had a music review from Sam Black:

"This past Friday featured the dark (and amazing) Kullervo Symphony (1892) by Jean Sibelius, along with a Finlandia finale. A new composition, Migrations, by current composer Olli Kortekangas, was also premiered. This featured the texts of four poems by Duluthian Sheila Packa, who has strong Finnish roots.
This turned out to be two and a half riveting hours of music in Finnish and English, sung by the 58-member YL male chorus from Finland, as well as soprano Lilli Paasikivi and baritone Tommi Hakala. Maestro Vanska has performed this piece for probably twenty years, and his interpretation of this dark and violent excerpt from The Kalevala is authoritative. I was not in Minneapolis, but I sat glued to my radio performance from 8:00 - 10:30 pm for this glorious music from one of the world’s truly great orchestras. It looks like Friday, February 19 will be next, with two of Sibelius’ Symphonies along with the Violin Concerto. I invite you to tune in."

"Migrations"-- Minnesota Orchestra Interview with Olli Kortekangas.  The musical composition, providing a setting to four of my poems about migration, was created to celebrate the 150th anniversary of Finnish - North American immigration and to serve as a prelude to Sibelius' Kullervo, a concert that also celebrates Sibelius' 150 years.  Watch the video to hear the introduction from Kortekangas:

From the Page to the Stage 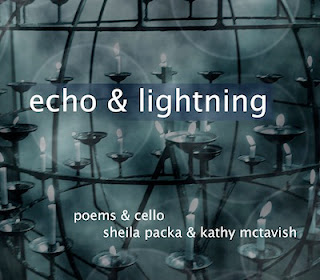 From the page to the stage, poems change.  Here are links to audio recordings of my work (in my own voice with cello by Kathy McTavish): 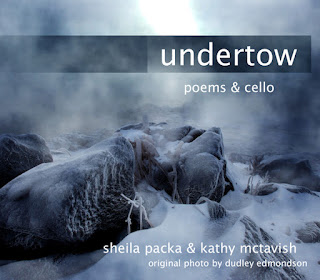 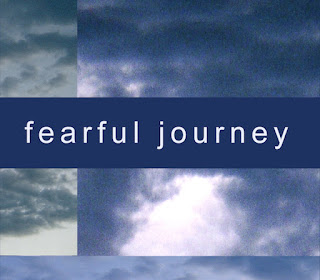 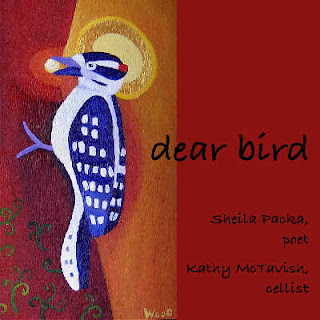 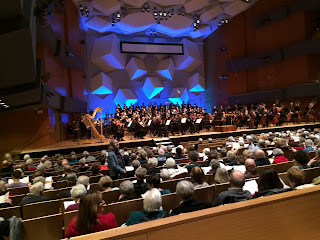 The Minnesota Orchestra tunes up before the Thursday a.m. performance.   The Playbill included the poems from Cloud Birds and Echo and Lightning that the composer used in his music! The symphony performance evoked the sound of water and wind. The sound was strong and layered. The YL Male Choir and Lilli Paasikivi (Mezzo) sang the lyrics.  Great voices!

Scroll down to see the story of the text.

Here's a review: "lush, haunting cantata with painterly images from the poet..." https://www.minnpost.com/artscape/2016/02/six-reasons-hear-minnesota-orchestra-play-kullervo 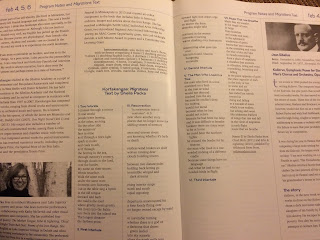 The Story of the Text:

The poems existed first, and Olli Kortekangas created the music for them. We communicated regularly via email and since then we have met in person. He was very sensitive to the content and rhythms of the poems but it was necessary for some lines to be altered slightly and some lines to be omitted in the music. We consulted about these necessary changes and he sent me early sketches of his composition.

The poems are from my two books, Cloud Birds and Echo and Lightning.

The titles were changed on a few of the poems to enable the audience to understand the arc of this musical story: Two Worlds, Resurrection, The Man Who Lived in a Tree, and Music We Breathe.

"Two Worlds" (Cloud Birds) explores the two worlds of past and present, this world and the next world. An interesting connection was made. A line in the poem refers to a hymn I had sung in Kokkola, while visiting a second cousin, Mikko Himanka, a retired minister. Kortekangas asked me specifically which hymn, and I was able to identify it for him, and it happened to be a hymn he had sung in childhood. The sound of this hymn is echoed in the musical composition. Also the mirror image created in the poem also occurs in the music.

The next poem, "Resurrection," is the poem "Migrations" in Cloud Birds. In the book, the poem has an inscription, a quote by the poet HD, "In resurrection is confusion...." from her long poem, "The Flowering of the Rod," and the word resurrection better reflected the meaning of the poem.

The third poem is from Cloud Birds as well. "The Man Who Lived in a Tree," is a narrative poem about a Finnish immigrant to America who worked in an underground iron mine but contracted a lung disease and returned home to Kalajoki, Finland to die. While ill, he hoisted himself into the limbs of a tree and did not want to descend. This is a story I learned when I visited the graveyard in Kalajoki where some of my ancestors are buried. My relative Mikko Himanka told me the story.

The fourth poem, "The Music We Breathe," is titled "What Is Found" and it is from the third section of Echo and Lightning.

Migrations has long been a metaphor for me as a poet. All of my grandparents are from the western side of Finland, and I grew up immersed in the Finnish language and culture. I believe that immigration affects families deeply, particularly in relation to borders, language and landscape. Immigrants make massive transitions as they enter a new culture and language, and many believe that speaking a new language brings out different parts of the self. Some feel they are a different self in the new language. This is perhaps why my grandmother was reluctant to speak English; she wanted to preserve an important part of her self identity. She lived in Minnesota, but she rarely left Finnish language and culture. This was a border that she kept. Also I think that landscape exists also internally, in the psyche, and this influences us. Although I did not learn to speak Finnish very well, my English has picked up the Finnish rhythms. Because poems are physiological, their breath --the words, meters, rhythms and sounds --are re-created in the reader. To read my work is to experience the north landscape.

I myself am most comfortable on borders, and less so in the midst of things. As a poet/artist, I also perceive the permeability of borders. I can cross back and forth into Finnish and American culture. My work is always narrative, but it does cross the border of genres and perhaps exists in a state of "between."
Posted by Sheila Packa Poetry Blog No comments: