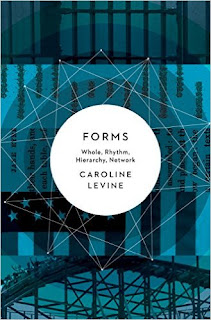 As a poet, I obsess over forms and patterns of language. Caroline Levine has a fascinating new book that examines form in the fields of literature, cultural studies, and politics. She eliminates boundaries at the same time that she explores a myriad of forms, and she offers a fresh way for writers to consider their material.

She is a person sensitive to pattern, and she begans this book with a reference to Jane Eyre.  In the description of Lowood, the school that Jane Eyre attends, Levine notices the organization of the day: girls lining up in two straight lines, ascending stairs to a room where in fours, the girls assemble in circles around the tables.   She explores these recurring and interesting shapes in Brontë's writing for its aesthetic and social implications.  She borrows a concept from design theory, the affordances of form.  She says:

"Broadening our definition of form to include social arrangements has, as we will see, immediate methodological consequences. The traditionally troubling gap between the form of the literary text and its content and context dissolves. Formalist analysis turns out to be valuable to understanding sociopolitical institutions as it is to reading literature. Forms are at work everywhere," Levine writes in the introduction. She continues with the analysis:


…
Over many centuries, form has gestured to a series of conflicting, sometimes even paradoxical meanings. Form can mean an immaterial idea, as in Plato, or material shape, as in Aristotle. It can indicate essence, but it can also mean superficial trappings, such as conventions—mere forms. Form can be generalizing and abstract, or highly particular (as in the form this thing is what makes it what it is, and if it were reorganized it would not be same thing). Form can be cast as historical, emerging out of the particular cultural or political circumstances, or it can be understood as ahistorical, transcending the specificities of history. In disciplinary terms, form can point us to visual art, music, and literature, but it belongs equally to philosophy, law, mathematics, military science, and crystallography.  Even within literary studies, the vocabulary of formalism has always been a surprising kind of hodgepodge, put together from rhetoric, prosody, genre theory, structural anthropology, philology, linguistics, folklore, narratology, and semiotics.

…forms are the stuff of politics….the work of political power often involves enforcing restrictive containers and boundaries—such as nation-states, bounded subjects, and domestic walls. But politics is not only about imposing order on space. It also involves organizing time: determining prison and presidential terms, naturalization periods, and the legal age for voting, military service, and sexual consent. Crucially, politics also means enforcing hierarchies of high and low, white and black, masculine and feminine, straight and queer, have and have-not. In other words, politics involves activities of ordering, patterning, and shaping. And if the political is a matter of imposing and enforcing boundaries, temporal patterns, and hierarchies on experience, then there is no politics without form.

For a long time, I've called poetry a pattern language, and I'm delighted to bring this method of seeing patterns to a broad spectrum of perception, composition, human experience.