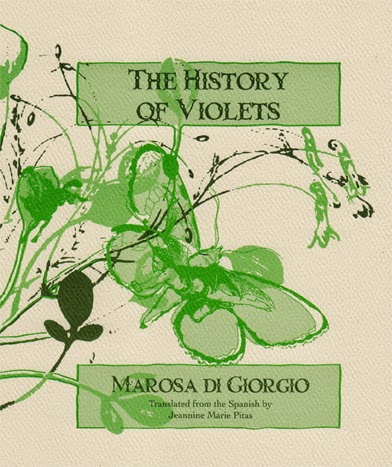 In the Introduction to History of Violets, translator Jeannine Marie Pitas writes about the Uruguyuan poet Maroso di Giorgio (1932-2004): "Navigating the precarious terrain between recollection and creation, beauty and danger, religious transcendence and violent eroticism, her poetry brings a new world into being."  This sentence aptly describes the hyper-sensuality of this gifted poet. Although some reviewers have complained, in reviews of the recent publication by Ugly Duckling Presse, and perhaps found her too odd or hermetic or dwelling too much in childhood and fantasy, I find her work riveting.

XX.
The daisies...were like deformed, circular birds with a single golden or silver head, surrounded by so many wings...burned the whole garden...the pungent fragrance of grapes, figs, honey, daisies set the whole house aflame. Because of them we were emboldened, like the insane, like drunks. And so we went on through the whole night, the dawn, the next morning and through the day, committing over and over again the loveliest of sins.

This prose poem is from The History of Violets, and it illustrates the tenor and quality that the poet achieved.  It vibrates with a wild energy that reminds me of the liminal state Clarice Lispector induces.


That girl wrote poems; she placed them near the alcoves, the cups. It was the time when the clouds were floating through the rooms, and a crane or an eagle was always coming to drink tea with my mother.
That girl wrote poems frenzied and sweet, with the taste of peaches and bones and birds' blood. This was back in the old summers of the house, or in autumn with its mist and kings. Sometimes, a druid would come, a monk from the depths of the forest, and he extended his skeletal hand, and my mother served him tea and pretended to pray. That girl wrote poems; she placed them near the alcoves, the lamps. Sometimes, the clouds, the April air came in, lifting them up, and there in the air they gleamed. And then the saints and butterflies crowded around, filled with joy, to read them.


Her book The History of Violets draws from memory, but blends it with magical elements, and a fraught with tension between characters, between realities, and between internal states.  This poem has a pleasing repetition that grounds it to the childhood home with its breathtaking mythic universe.

The Native Garden Is In Flames (unpublished)
by Marosa di Giorgio

1.
I went out from my house to my grandparents' house, from my parents' land to my grandparents' land. It was a gray afternoon, but joyful, peaceful. As the girls of the past had done, I disguised myself so as to pass unnoticed; I put on my rabbit's mask and walked among the old and new farmhands; I jumped across the meadow and reached the old house. I stepped through the rooms. All were happy; it was somebody's birthday. On all four sides they had placed parcels and jars of syrup and parcels. In the center of the table, an exquisite bird, a delicious corpse surrounded by little lights. Grandpa, who was always serious, smiled and laughed this time, and before evening fell he told me to go with him to the garden; he was going to show me something. And there the air threw down a coin; I saw it shining; when it fell, it changed into a piece of candy, from which a long, flowered gladiolus stem immediately grew out. I stepped out of its shadow, and it grew even more, and it lasted for weeks and weeks.

I am from that time,

the sweet years of Magic.

In the introduction to Diadem, translator Adam Giannelli writes: "One of the most innovative aspects of her work is how she lips seamlessly from prose into verse, often beginning a paragraph in the middle of a sentence, interrupting the syntax, like a line break. By mingling the fluidity of prose with the concision of verse, she creates a malleable form in which time contracts and expands."

This poetry is strange and beautiful, and I recommend it. The translator Jeannine Marie Pitas has done a wonderful service to bring this important work into American literature.

Information about the translator: http://allgiving.wordpress.com/authors/jeannine-m-pitas/