Moonlight in Her Voice 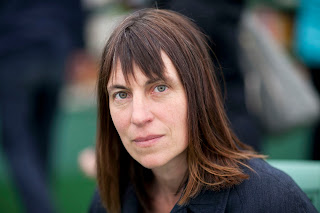 Poet Alice Oswald holds the Poetry Chair at Oxford University. In her inaugural lecture, "The Art of Erosion," she begins with a story of man who moved into a house that did not have room for his piano, so he brought it outside and placed it beneath an apple tree where it became an instrument of meteorological phenomena, playing when a branch fell upon the broken lid or when an apple struck the keys. This is the art of erosion.

A cyanotype is created by the sunlight eroding the photographic paper and leaving a profile of a leaf. The force of erosion by water, sun, or wind on language also makes a mark, wears a hole, leaves an empty space. Some poets have "constructed" poems, she asserts. Others have poems of erosion evoked by a phrase or transforming image. She speaks of Samuel Beckett. He spoke of the "black holes" in the work of Beethoven; it was not the sound so much as the sighing, he said. Beckett instructed the actors of his play to speak with "moonlight in their voices."  This phrase is an apt description of Oswald's work.

Ange Mlinko in the New York Review of Books identifies her work "water music." She says Oswald is a preternatural poet as opposed to a nature poet.  Erosions enacted on language in a poem create an opening. Like the piano, the poem becomes a new kind of instrument. Her poems ""Body", "Flies" and "A Short Story of Falling" are examples of "moonlight in their voices."  The images creates a natural music.  “Poetry,” Oswald says, “is not about language but about what happens when language gets impossible.”

Listen to the podcast of her lecture at Oxford University: http://podcasts.ox.ac.uk/art-erosion
See: https://www.poetryfoundation.org/poets/alice-oswald