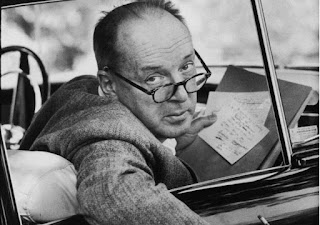 Lolita, light of my life, fire of my loins. My sin, my soul. Lo-lee-ta: the tip of the tongue taking a trip of three steps down the palate to tap, at three, on the teeth. Lo. Lee. Ta.

She was Lo, plain Lo, in the morning, standing four feet ten in one sock. She was Lola in slacks. She was Dolly at school. She was Dolores on the dotted line. But in my arms she was always Lolita.

Did she have a precursor? She did, indeed she did. In point of fact, there might have been no Lolita at all had I not loved, one summer, a certain initial girl-child. In a princedom by the sea. Oh when? About as many years before Lolita was born as my age was that summer. You can always count on a murderer for a fancy prose style.

Ladies and gentlemen of the jury, exhibit number one is what the seraphs, the misinformed, simple, noble-winged seraphs, envied. Look at this tangle of thorns.


An unforgettable voice. First, the scandal. Second, the attitude. Third, the words themselves, at play in many ways, alliterative and rhythmic.  His flights of imagination are breathtaking. He said  "every writer is a great deceiver" and then points to Nature. One only needs to look at biomimicry and the ways that animals evade predators. Vladimir Nabokov talked about his writing process, which was a method of jotting on index cards which later he rearranged and dictated to his wife. His writing then is a fusion of oral story-telling and "the correct names, or the inches and tints of things."  Enchantment, as he says. This is how he explained it:

All I know is that at a very early stage of the novel’s development I get this urge to collect bits of straw and fluff, and to eat pebbles. Nobody will ever discover how clearly a bird visualizes, or if it visualizes at all, the future nest and the eggs in it. When I remember afterwards the force that made me jot down the correct names of things, or the inches and tints of things, even before I actually needed the information, I am inclined to assume that what I call, for want of a better term, inspiration, had been already at work, mutely pointing at this or that, having me accumulate the known materials for an unknown structure. After the first shock of recognition—a sudden sense of “this is what I’m going to write”—the novel starts to breed by itself; the process goes on solely in the mind, not on paper; and to be aware of the stage it has reached at any given moment, I do not have to be conscious of every exact phrase. I feel a kind of gentle development, an uncurling inside, and I know that the details are there already, that in fact I would see them plainly if I looked closer, if I stopped the machine and opened its inner compartment; but I prefer to wait until what is loosely called inspiration has completed the task for me. There comes a moment when I am informed from within that the entire structure is finished. All I have to do now is take it down in pencil or pen. Since this entire structure, dimly illumined in one’s mind, can be compared to a painting, and since you do not have to work gradually from left to right for its proper perception, I may direct my flashlight at any part or particle of the picture when setting it down in writing. I do not begin my novel at the beginning, I do not reach chapter three before I reach chapter four, I do not go dutifully from one page to the next, in consecutive order; no, I pick out a bit here and a bit there, till I have filled all the gaps on paper. This is why I like writing my stories and novels on index cards, numbering them later when the whole set is complete. Every card is rewritten many times. About three cards make one typewritten page, and when finally I feel that the conceived picture has been copied by me as faithfully as physically possible—a few vacant lots always remain, alas—then I dictate the novel to my wife who types it out in triplicate.

–from an interview with Alvin Toffler, published in Playboy, January 1964

This is from an article written by Emily Temple and published on LitHub:
https://lithub.com/every-great-writer-is-a-great-deceiver-vladimir-nabokovs-best-writing-advice/
Posted by Sheila Packa Poetry Blog