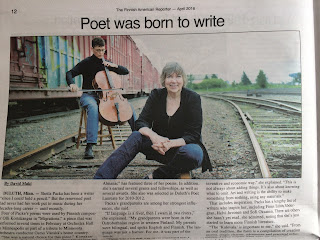 Thank you to the Finnish American Reporter for this article!


If language is a river, then I swam in two rivers. My grandparents were born in the Ostrobothnian region in western Finland. My parents were bilingual, and spoke English and Finnish. The language was not a barrier. For me, it was part of the music. There was a lot that was never translated that I learned at a level subliminal or physical. It's no surprise that I'm obsessed with languages.

My parents had many siblings, and they loved music and dancing. My aunt Martha, who lived next door, was a naturalist and visual artist. My younger sister designs clothing, and my older sister built her own house and raised horses. Many of my aunts and uncles played accordions. The bellows of an accordion sound like breathing. Family visits were like big reunions, held often. But now my parents have passed on, and so have many of my aunts and uncles. Life is much more quiet!

I grew up in a working class family on the Iron Range in Minnesota. We lived on the Vermilion Trail, a century old route near the St Louis River, Lake Esquagama, Silver Lake and Bass Lake. I had no idea of the history of this place until recently. Our home was also in the midst of iron and taconite mines. My father was a heavy equipment operator, and my older sister was a train engineer for a mining company. I spent one summer in college working as a laborer at Minntac.  Of the Iron Range, I say: Whiskey was a life waiting for somebody to marry it.

I value my immersion in Finnish culture.  When I met relatives in Finland, I noticed two characteristics that I've come to consider particularly Finnish: quiet attentiveness and acceptance. As a writer, it's been helpful to be a good observer, to be receptive, and to be able work skillfully with the things at hand.  My mother's cousin MIkko Himanka in Kokkola, Finland is a writer of local history.  His father died before he was born, and he has dedicated his time to recording the stories of war orphans.

I was reared beneath Norway Pines. I think of them as my clan: tall with strong trunks and long and buoyant limbs. What I mean by this is that people are not separate from the landscape. The patterns and events in nature occur also in human experience: river flow, migrations, floods, or lightning strikes. As a child who loved to swim, I wasn't just moving in the water, but water was moving in me. I'm interested in the correspondences here. Our body is also the body of earth. History is the accumulation of stories, generation after generation, similar to layers of sediment and compost. We walk on our history. We take our harvest from it, and we bury our dead in it.  One more thing: bears. I see bears a lot, and I dream about bears. Maybe they are magic.

Good Finnish design uses natural materials in an inventive and economic way.  I seek to achieve this in my own work. This not always about adding things. It's also about knowing what to omit. Art and writing is the ability to make something from nothing, using any materials. As a writer, it's quite satisfying to invent a form and find correspondences.  There's a pattern, and it's the job of artists and writers to reveal it.