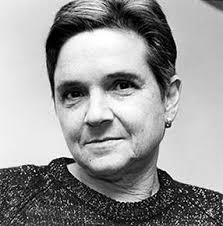 Adrienne Rich and her thinking had great influence on American poetry and feminism.  I feel lucky that she was in the world when I was coming of age. She had a powerful voice.

You want to ask, am I lonely?
Well, of course, lonely
as a woman driving across country
day after day, leaving behind
mile after mile
little towns she might have stopped
and lived and died in, lonely

from Diving Into the Wreck “Song,” by Adrienne Rich

Here is an excellent article about her life and work: https://newrepublic.com/article/132117/adrienne-richs-feminist-awakening

Here is a link to her famous poem, "Diving Into the Wreck,"  https://www.poets.org/poetsorg/poem/diving-wreck

First having read the book of myths,
and loaded the camera,
and checked the edge of the knife-blade,
I put on
the body-armor of black rubber
the absurd flippers
the grave and awkward mask.
I am having to do this
not like Cousteau with his
assiduous team
aboard the sun-flooded schooner
but here alone.

There is a ladder.
The ladder is always there
hanging innocently
close to the side of the schooner.
We know what it is for,
we who have used it.
Otherwise
it is a piece of maritime floss
some sundry equipment.

Besides Diving Into the Wreck, another book that was important was The Dream of a Common Language.  The book had a section, 21 lesbian love poems.


to move openly together
in the pull of gravity, which is not simple,
which carries the feathered grass a long way down
the upbreathing air.

This small excerpt captures opposing forces: the downward pull of gravity and the up-breathing air. It was difficult to live as a lesbian, openly. No it was not simple, but because of her writing, so many more of life's possibilities were illuminated. She was skillful at her craft.

To read "Women and Honor: Some Notes on Lying" https://docs.google.com/file/d/1NzeeY6rkFbq1izBz-nK924jdvohXW6V8oKeC7xu-cRAgvWYyBArl2FKVjT5j/view