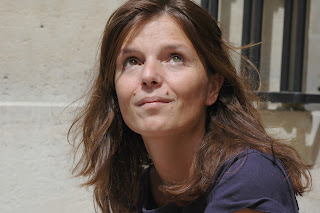 "When creating a manuscript, I often assemble a constellation of books.  My own is born under these auspices. The other writers chosen for their sensibility, language, topic, and skills are like aunts in the fairytale who come to bless the newborn."

According to Wikipedia, de Kerangal's celebrated novel, Birth of a Bridge [Naissance d'un pont, 2010]', presents a literary saga of a handful of men and women who are charged with building a bridge somewhere in a mythical California. Birth of a Bridge was short-listed for the Prix Goncourt, and awarded the Prix Médicis and has been translated into several languages worldwide.

Mend the Living [Réparer les vivants, 2014] has also won several prizes including the Prix Orange du Livre and the Grand prix RTL du livre. Mend the Living was recently adapted for the stage at the theatre festival in Avignon, receiving rave reviews for its intimate look at the realities and philosophical questioning around organ donation.

Maylis de Kerangal was interviewed by Jessica Moore, her translator, for Bombsite (Arts) Magazine.
http://bombmagazine.org/article/95631124/maylis-de-kerangal  They discussed the way that a writer explores a story under the influence of a chosen few texts.  Jessica Moore says, "Books are shapers of our inner landscape. We are composed of the texts that have passed through us, leaving that sparkling trail..." and de Kerangal responds:


I write from all these books, and also through them. This is not at all something that overshadows a voice of my own. On the contrary, it’s through all these books that I love that I’ve been able to find something that is my own. I try to formalize this approach a little by gathering a collection around me as I begin a novel.

I don’t know if many authors do this, but one of the great movements of the beginning of a book for me is to summon these influences, to go in search of them. I put myself under their influence. And putting together the disparate collection of texts that will accompany me is already an act of writing. All kinds of books and printed matter: Mrs. Dalloway for instance, or poetry, scientific texts, articles from newspapers, novels. They aren’t on the same subject—the heart, for example, in Réparer—but they are texts with which I establish echoes, resonances. I compare this to getting together with a group of friends for a big bank robbery, a language hold-up. I already have my collection for the next book.

The interview explores de Kerangal's writing process and is a conversation about translation. Translation, de Kerangal says, is like listening to her music that is played upon a different instrument than the original. This is a wonderful analogy, as it evokes the process of composition and performance, and it reassures that although the translated is not exact, the interpretation can be beautiful.
Posted by Sheila Packa Poetry Blog