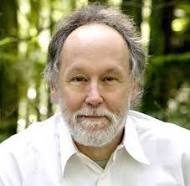 The writer Barry Lopez has long provided deep insight into the natural world, human interaction with wildlife. This excerpt is about place, language and seeing. It's in Granta Magazine, Dec 2015:

If the first lesson in learning how to see more deeply into a landscape was to be continuously attentive, and to stifle the urge to stand outside the event, to instead stay within the event, leaving its significance to be resolved later; the second lesson, for me, was to notice how often I asked my body to defer to the dictates of my mind, how my body’s extraordinary ability to discern textures and perfumes, to discriminate among tones and colors in the world outside itself, was dismissed by the rational mind.

As much as I believed I was fully present in the physical worlds I was traveling through, I understood over time that I was not. More often I was only thinking about the place I was in. Initially awed by an event, the screech of a gray fox in the night woods, say, or the surfacing of a large whale, I too often moved straight to analysis. On occasion I would become so wedded to my thoughts, to some cascade of ideas, that I actually lost touch with the details that my body was still gathering from a place. The ear heard the song of a vesper sparrow, and then heard the song again, and knew that the second time it was a different vesper sparrow singing. The mind, pleased with itself for identifying those notes as the song of a vesper sparrow, was too preoccupied with its summary to notice what the ear was still offering. The mind was making no use of the body’s ability to be discerning about sounds. And so the mind’s knowledge of the place remained superficial.