Three Steps on the Ladder of Writing 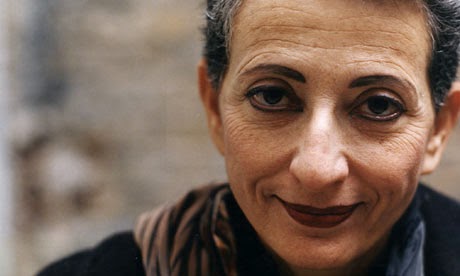 Hélène Cixous, a French writer, wrote Three Steps on the Ladder of Writing. The book was published in 1993, and she has written many others, but I continue to reread this one because her secrets of writing are fascinating.

She says writing is a "strange science of farewells. Of reunitings."  The reader is plunged into the book with a marvelous speed.  "Writing in its noblest function, is the attempt to unerase, to unearth, to find the primitive picture again, ours, the one that frightens us. Strangely, it concerns a scene...we are the audience of this scene...witnesses to an extraordinary scene whose secret is on the other side." This sentence is key to the beginning of the writer's voice because each person has a unique extraordinary scene that they have witnessed. It awakens consciousness.


The School of the Dead

Writers commonly begin writing soon after encountering loss or death, according to Cixous.  "The first dead are our first masters, those who unlock the door for us that opens onto the other side, if only we are willing to bear it." In her philosophy, death is the key to understanding life.

"We need to lose the world, to lose a world, and to discover that there is more than one world that the world isn't what we think it is. Without that, we know nothing about the mortality and immortality we carry. We don't know we're alive..."

And in addition, writing makes us foreigners even inside our own families. "When I write I escape myself, I uproot myself." She cites many examples of writers and artists who explore "the other" in their work, and who are essentially unknown or absent to their families in the process of writing. The same is true of reading, she claims. It makes us strangers in joy. Of the writer Montaigne, she says is true of many writers: "No sooner do we enter than we take flight. In the first paragraph we already have a series of directions. And each one of them will be pursued, none of them will be abandoned by the text."

She uses examples of Edgar Allen Poe who said that we pine away during the process of writing, we erase ourselves, seal ourselves up inside a tower. This is an allegory for what happens in creation. It happens symbolically and literally in many stories.  Poe she says executes the narrator.

"The only book worth writing is the one we don't have the courage or strength to write." Cixous says, "We have to become two to say that to ourselves: I the living one and I the dying one."  and "We go toward the best known unknown thing, where knowing and not knowing touch, where we hope we will know what is unknown."   In this way, writing becomes an act of discovery for the writer as well as the reader.   She continues, "...books are exactly those steps that should lead us to the point where oppositions meet, and coinciding, suddenly open up to what Kafka would call 'the Holy of the Holies.'"  And this is the place where the writer must take everything off, shoes, clothing, and all expectations to approach the place of the "last hour" where we are going in the direction of truth, and if we cannot speak it, because it cannot be spoken, at least we can "unlie" and avow the unavowable.

The School of Dreams

"All great texts begin in this manner that breaks: they break with our thought habits, with the world around us, in an extreme violence that is due to rapidity. They hurl us off to foreign countries. In fact, dreams are the route to the place of the dead without our dying." Dreams are a sacred place. She continues to explore her thoughts about farewells and reunitings in this section of the book. Dreams send us places against our will, we flee ordinary times and places and enter the extraordinary. Time collapses. "Dreaming and writing do have to do with traversing the forest, journeying through the world, using all the available means of transport, using your own body as a form of transport."  In the same way, good books transport us.

She writes that dreams instruct the writer in four ways to write without transition, with speed, with fear (a better way to approach the concept of "conflict" because it takes us deeper into what is at stake, and with magic. All of this comes to the turning point, the place of transformation.

Avoid interpretation, she writes. Interpretation is death for the dream. One must enter it and leave it free. "We must let ourselves be carried on the dream's mane and must not wake up--something all dreamers know--while the dream is dictating the world to us." The dream takes up down to the depths, and here is the next lesson for writers.

The School of Roots

Cixous remarks on a strange association between women, birds and writing. She finds it in the Bible, and in several texts, and she connects it to the discovery of hidden joys and the passage of all frontiers. Writers need to look to his or her roots: to the name that they have been given, to their birth certificate, to the place where they were born and grew up, and to what fed them in their life.

As an example, the beginning of her book begins with the letter H. I is part of the letter, and it can be considered the "I" or writer. It represents the language the writer is born into, and each language bears the culture and thousands of emphases and meanings carried by the language. H is a significant letter in French. The other part of the letter H, the second I stands parallel. Perhaps it is the "other" that the writer also becomes, or it is the reader.  It signifies the language of the other. Notice there is a connection between the two that "forms a passageway between two shores." Between one language and another, between the breath of the writer and the breath of the reader, it forms the shape of a ladder, and it is this ladder that we use to descend and ascend as readers and writers. H is the first letter of Hélène Cixous' name.

These are her secrets of good writing, and I have only provided a short glimpse at her book's structure. She fills in these ideas much more thoroughly and provides examples of various texts.