In the Kalevala: Three Rivers around Pohjola 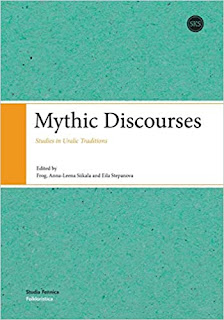 The beauty of other cultures and languages is the discovery of different ways of thinking.  New frames. I've been reading a book of essays, Mythic Discourses: Studies in Uralic Traditions, edited by Frog, Anna-Leena Siikala & Eila Stepanova published by the Finnish Literature Society, Helsinki.  I also had the opportunity to listen to a lecture by Eila Stepanova sponsored by the Finlandia Foundation. This volume provides me with much more context and history as I read and study the Kalevala, the epic poem of Finland, collected from oral tradition, singing minstrels, by Elias Lonnrot. There are several translations of the book, and I have about four of those.  I've been reading the Kalevala for many years. It is a source for me, a place where I learn more about my family's Finnish history, heritage and culture.

It takes time to see and understand subtleties. In the English language, many American and European people conceive of the afterlife with Christian perspectives. Most are familiar with the story of what happens in spiritual texts in the Christian narrative: heaven or hell.  Heaven is the most sublime place, the heavenly, blissful, sunlit blessed place with God, the creator.  Hell is the worst place, the miserable, painful, fiery, dark place with the devil.  For a time, the Catholic church held a category called purgatory.  But in the Kalevala, with its pre-Christian roots, this understanding is somewhat different  It is not even called the "afterlife" but the Otherworld, Pohjola.  The Finnish word Pohjola literally translates to North land.

This is a different frame. The binary is less clear. Pohjola is either a womb or a grave or a strange village or country.  It is not heaven, it is not in the sky. It is an island set upon open waters. The concepts of Tuonela or Manala refer to the realm of the dead or the underworld. Rivers must be crossed in order to find Pohjola, and the rivers are the Rivers of Tuonela, Pojohola, and Manala which have dangerous rapids and waves like vertical swords. Not many return, it could be said.  Not any.

In old tradition, in the time of Kalevala rune-singers, a lament singer must perform at funerals in order to ensure a safe passage for the deceased.  Eila Stepanova provides fascinating information and stories about the women's laments alongside the Kalevala.  Here is a description of the presentations and I have also included a link to both lectures.

Women’s Laments alongside the Kalevala: Forgotten Symbols of Finland’s Nation-Building

Eila Stepanova discusses Karelian laments in the context of national romanticism in Finland starting from the nineteenth century up to the present day, beginning with Elias Lönnrot, who was also the very first collector of this tradition of women’s poetry. In the context of national romanticism in 1800s, this genre of traditional poetry was important in Finland’s nation-building project but has been forgotten in the shadow of Lönnrot’s Kalevala.

Eila Stepanova is a Finnish folklorist specializing on Karelian and more broadly on North Finnic lament poetry. She received her doctoral degree at the University of Helsinki. She is recognized as the foremost active expert on Karelian laments and as an expert in Karelian culture more generally with a variety of fieldwork experience. Stepanova is currently executive director of the Society of Karelian Culture (Karjalan Sivistysseura).

The Viking Age in Finland

The Viking Age is a period of history that has fascinated people for generations, and interest in it has only grown in recent years with the popularity of programs like The Vikings. Popular knowledge of the Viking Age has tended to focus on Scandinavians and their westward expansion across the North Atlantic. In this talk, I will introduce the Viking Age as a period of mobility and cultural contacts that also extended to the east along inland routes. In these regions, speakers of the language that would eventually become the Finnish, Karelian, and Vepsian languages were also active participants. I focus on territories where Finnic languages were spoken or where they would be spoken later. Today, we tend to imagine where languages are spoken on a map more or less along the lines of where they were spoken in the nineteenth century. At the beginning of the Viking Age, however, the situation was very different. Most people don’t realize it, but the Viking Age was pivotal in the histories of Finnish and Karelian languages and cultures, ultimately leading them to be dominant in the areas where they were familiar in recent centuries.

Frog is an Academy of Finland Research Fellow and Associate Professor of Folklore Studies at the University of Helsinki. He specializes in early Finnic and Scandinavian contacts and cultural reconstruction. He received his PhD from University College London in 2010 and an Associate Professorship from the University of Helsinki in 2013. From 2011–2014, he was co-coordinator of the Viikinkiaika Suomessa – Viking Age in Finland project, which produced the books Fibula, Fabula, Fact: The Viking Age in Finland (edited by Joonas Ahola and Frog with Clive Tolley, 2014) and The Viking Age in Åland: Insights into Identity and Remnants of Culture (edited by Joonas Ahola, Frog, and Jenni Lucenius, 2014).

The direct link the lectures is here: https://youtu.be/7E5oQeYQdUY.  Eila Stepanova is first.  Frog is second.