Listening to Silences and Gaps 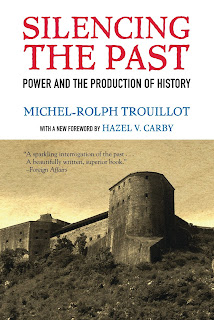 What don't we know?

Michel-Rolph Trouillot's book examines the omissions and distortions in our history books. It's a wonderful analysis that distinguishes between "the past" and "history of the past." In this book, he does a full examination of the Haitian revolution which occurred 1798-1804. It's nearly unheard of, and yet, it was a slave rebellion that overthrew a government.  Trouillot also considers many debates about Christopher Columbus and the discovery of America and incidents surrounding the "Remember the Alamo." He also examines the outright denial of the Holocaust, shedding insight into how and why those things happen. He also considers the narratives around the taming of the Wild West and notes the history of the West is often framed around western films featuring John Wayne. A dominant culture can not or will not fully see or fathom political or cultural events that challenge their world view. These are silenced, omitted, dismissed, or disregarded.

Since the publication of Silencing the Past in 1995, a broader cultural understanding has reframed Columbus Day in the United States. Columbus himself kept a journal, and he wrote no entry for Oct 12. The Spanish monarch for whom he established a trade route took very little notice. It was only in the beginning of the 1900s that a (rather fictional) story of Columbus emerged and a festival was held. This festival led to further fictional narratives. Since the publication of Trouillot's book and others, we have learned about the violence, oppression, and smallpox infestation that Columbus and other Europeans brought when they arrived. As a result of Columbus capitalist venture, millions of Native Americans died and were displaced and continued to be displaced and harmed by European settlers. It is still a federal holiday, but in some locales, the day has been renamed as Indigenous Peoples Day. In some states, such as Minnesota, the state employees no longer are granted a Christopher Columbus holiday.

Slowly, we see new research that changes the old stories. A new history book, Lakota America: A New History of Indigenous Power by Pekka Hämäläinen examines the complex cultures and political influence of Chief Red Cloud and the Lakota people. This culture and their territory influenced the formation and history of the United States. It isn't anything you would learn in primary or secondary school history class.

The new stories can transform the way that we see our world, not only the large events but also the smaller, individual stories. New technologies and methods have allowed more precise and accurate data. This is threatening to some people like Donald Trump who condemned history classes that include lessons on systemic racism, teaching what he called “lies” and “left-wing indoctrination.” He called for a "patriotic" education. This is a troubling call that seeks to suppress the truth. Allowing a political agenda to dictate history is a mistake, and it is characteristic of tyrants. Verifiable information would be ignored and silenced in favor of a story that aggrandizes policies that are detrimental and even deadly. Trump is an example of what what is bad about politicians in George Orwell's famous essay, "Politics and the English Language." Hopefully the defeat of Trump in the 2020 presidential election will diminish the racism that he helped to stoke.

New writing by Saidiya Hartman is a welcome perspective that celebrates the lives of girls and women in the early 1900s.  She has conducted intensive research in the archives of black Americans. The original sources were sociological surveys, records of home visits made by social workers, newspapers, and primary sources that clearly revealed a racial bias. Her analysis in her books bring fresh stories about these people, places, and events. She is the author of Scenes of Subjection: Terror, Slavery, and Self-making in Nineteenth Century America (Oxford University Press,1997) and Lose Your Mother: A Journey Along the Atlantic Slave Route (Farrar,Straus and Giroux, 2007), Wayward LIves, Beautiful Experiments (Norton, 2019). In these books, Hartman is providing deep insights into the rich culture as well as providing a critical examination of the institutions in those eras.

I appreciate Trouillot's advice about researching the gaps and silences in history. There is a "canon" which must be continually examined for its biases. It has been said by others.The writer Tillie Olson, a depression era novelist and essayist, was fully committed to "listening to silences." In an obituary of Tillie Olsen in Slate Magazine, Jess Row said, "Look around you on your way to work, she might say to us, or the next time you eat at a restaurant or visit a nail salon, and listen: That deafening silence is the sound of literature not being written." An interview with Tillie Olsen was published at the Modern American Poetry website (currently under re-construction). Here is an excerpt:

Q: What gives you hope?
OLSEN: History gives me hope.
Q: Even though this century's been so violent?
OLSEN: The century has also been full of resistance. Why is it that the resistance movements--often so heroic and so ingenious--get obliterated from consciousness? There's always been resistance, and there comes a time when changes are made. The fact that human beings do not put up forever with misery, humiliation, degradation, actual physical deprivation but act is a fact which every human being should know about. We are a species that makes changes.There was a period in my parents' lives--it was a period in our country's life--when the ideal and the real were dynamically contiguous. They really felt that the international movement was going to change the world and make it a more just, human place. They were young when they came here, but they'd lived so very, very much.The world is so different from the world of their youth and the world of my youth. Still, power is primarily held by people of wealth and position. By and large, class interest still rules in our country.

If writers and researchers delve into the silences, the results will yield important pieces to the puzzle. We will learn more about the obstacles, understand more complexity, and contemplate more stories of resilience. These words of Tillie Olson attest to the value and power of written language.  If we record our history, we can help provide hope to ourselves and the future generations.