Tom Sleigh: Traces of the Journey 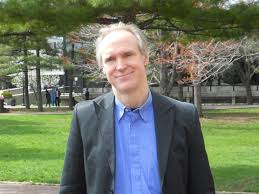 The Poetry Book Club at Zenith Bookstore meets on the second Wednesday of each month at 5:30 pm. On July 10, 2019, the selection is Tom Sleigh's House of Fact, House of Ruin.

Poetry is always political. Even if it is not about a political event, the political is expressed in the word choice, perspective, and land that it arises from.  Once I attended a workshop taught by the Irish poet Eavan Boland. She says land is always inseparable from politics. But she also criticized poets who use political events, especially traumatic events such as the Holocaust, as a type of "political tourism." She underlined poetry's ability to recreate a moment, and she cautioned poets against re-traumatizing others. I knew what she meant by this.

Tom Sleigh's poetry reflects his journeys in places of violent combat. His latest book House of Fact, House of Ruin was published in 2018 by Graywolf Press with a companion book of essays, The Land Between Two Rivers: Writing in an Age of Refugees.  His work is the effort to witness and bring the hard facts into literature. In Iraq, Lebanon, Mogadishu, Dadaab (a large refugee camp) and other places, he has met and talked with military personnel, Red Cross workers, and civilians. His work is also a poetry of witness but also of form (images, figurative language, and sound patterns). Many of these poems are sonnet forms with a subtler rhyme.  It's effective. It honors the tradition while at the same time playing with sound in way that suits contemporary times. This attention to craft and his sensitivity create very good poems.  He says:

political emotions are always complex, and deeply troubled. So the accurate expression of mixed emotion seems to me to be at the core of the poetry I most care about. Yeats said it in a somewhat more rhetorical way when he wrote that the purpose of art was to hold reality and justice in a single thought.

It would be wrong for poetry to ignore the reality of our world: the wars, the suffering, and the stories of survival. He describes the influence of the poet Bashō on his own work. Sleigh's earlier book uses the haibun form, and this book reflects the "color."  The journey was to Iraq.  The titles are direct but when it comes to the content, the poems have a similar imagistic, evocative, and haunting quality.

The moon and sun are eternal travelers. Even the years wander on. A lifetime adrift in a boat or in old age leading a tired horse into the years, every day is a journey, and the journey itself is home.

The text collects the images and observations Bashō found in his wanderings.  The journey was through the landscape of Japan, and it was also an inner journey. As a scholar of Buddha and Confucius (among others), he created a literary art that held the vivid images of place, detachment from things, and passing of all things including the self. An important term is the Japanese concept of aware. Ivan Morris describes it as "the pathos inherent in the beauty of the other world, a beauty that is inexorably fated to disappear together with the observer."  Also important were the "pillow word" (referring to the double entendre or word that evokes many meanings) and the "pivot." This turn is very important in haiku. It creates an ambiguity that deepens the meaning.

In an essay on Poets.org, poet Aimee Nezhukumatathil writes:


the form is thinking of haibun as highly focused testimony or recollection of a journey composed of a prose poem and ending with a meaningful murmur of sorts: a haiku. The result is a very elegant block of text with the haiku serving as a tiny bowl or stand for the prose poem.

She goes on to list the important elements of the haibun form
Tom Sleigh writes about the importance of Bashō's work to his own:

…this quality that I find most galvanizing in Bashō’s work—not the Buddhist trappings, or the delicate melancholy, or his sensitivity to flowers and mist; but his submersion of self in the world as he finds it, a world that is always every moment fighting to restore its equilibrium, but only as a way of losing it.

I like Sleigh's work here in this book. Some of his early poems are not among my favorites, as they feel more cocky and less attentive. This is not the case here. Even when Sleigh is not writing haibun, he is using the elements of this form. It feels right.