Diane Jarvenpa, Poet: The Way She Told Her Story 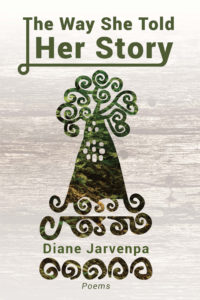 I wrote this blurb for this forthcoming book of poems:


From the land of the midnight sun, deep forests, and rye fields comes a girl, a shape-shifter. In The Way She Told Her Story, Diane Jarvenpa explores Finnish women's history, immigrant stories, and the mother/daughter terrain: "...a shifting place/ not a country/ more a continent with moving borders." These poems were forged in the context of the Finnish Kalevala and also another text of the same era, a collection of ancient runes sung primarily by women, the Kanteletar. Jarvenpa comes to poetry through song, and through her own mother, poet Aili Jarvenpa. She has searched archives and found forgotten stories breathing with life, and she has blended these with her own. In one poem, a grandmother smokes a pipe and says, "in the center of the heart/ is a lie and a truth." This might be true of all women's stories. Past the stereotype of women who tend the home, marry and bear children and past the stereotypes of those women that refuse the domestic roles, we glimpse the true ways that women create their lives and their communities. The women in these poems are witches, mothers, housekeepers, artists, journalists, vagabonds, and revolutionaries. Genealogy is here, but also "an inheritance of common things" that transforms into a new language of lyric, script, potter's wheel, poetry, and flight. The immigrant undergoes difficult passage. It takes courage to leave everything behind to enter a new landscape and a new language. This is a testament to creativity and resilience that this poet puts in the reader's hand. I love this book! Diane Jarvenpa, like her poem The Rune Singer, "sleeps a different breath of notes/ until dawn is strewn with magpies." (Publisher: New Rivers Press (scheduled for late November 2017) ISBN-13: 978-0898233667

“Bittersweet is a fusion sound and a melding of both Finnish and American folk traditions; the album embodies both musical landscapes. Jarvi has taken the Nordic sound and also brought it into American folk, sometimes evoking mountain music and café accordion sound. Her voice is resonant, rich, and she uses it like an instrument. Many (but not all) of the lyrics are in Finnish, and this lends an aching and beautiful element. Her skills as a poet are also present in her music. She evokes the flight of a sea bird and sparrow and the feeling of wandering in the first snow amid falling stars. Even if one does not follow the exact words, her expressive voice carries the meaning. There is a mystery that she weaves from the landscape, the sounds, and the stories. Buy this album. Not only will you support this strong musical and poetic voice, you will cross untravelled regions of your soul and be glad for the journey.” -Sheila Packa and Kathy McTavish –New World Finn