Origin of Birds: Circles Within Circles 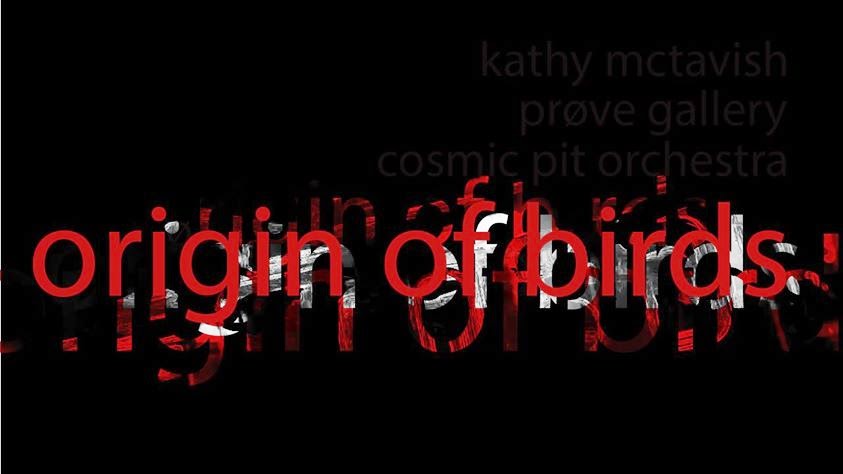 A new net-art installation will be at the Prøve Gallery in Duluth. The opening is on April 11 at 7 pm with live music by the Cosmic Pit Orchestra.  "The Origin of Birds" is created by Kathy McTavish: it features her new film generator, text, and music. For more information: http://originofbirds.blueboatfilms.com/  and and http://www.provegallery.com/

In the creation stories, both the bird and its egg arrived before the earth was made. According to an ancient Greek story, the god χάος (Chaos) was the first to emerge at the creation of the universe. Soon after her came Gaia (Earth), Tartaros (the Underworld) and Eros (Love). In many versions, Chaos then gave birth to the Birds. In Genesis, the first book of the Bible, God created birds of on the fifth day of creation.

In the creation story of the Kalevala, in the beginning when the universe is only sky and water, a bird flies over the ocean looking for a place to build her nest. Ilmatar, the spirit of the air, has been swimming in the ocean because she had become bored in the sky. In addition, the wind or waves have made her pregnant. She has been pregnant for a long, long time. The bird —perhaps a Common Pochard, a medium sized duck known for its diving—needs a place to build a nest.  In order to help, Ilmatar raises her knee and shoulders above the surface of the water. The duck mistakes her for an island and builds a nest. When the duck broods upon the nest, the heat becomes so intense that Ilmatar can’t help but twitch her knee and this upsets the nest, and the eggs break. Here is an excerpt from the Kalevala Runo 1:

In the sand they do not perish,
Not the pieces in the ocean;
But transformed, in wondrous beauty
All the fragments come together
Forming pieces two in number,
One the upper, one the lower,
Equal to the one, the other.
From one half the egg, the lower,
Grows the nether vault of Terra:
From the upper half remaining,
Grows the upper vault of Heaven;
From the white part come the moonbeams,
From the yellow part the sunshine,
From the motley part the starlight,
From the dark part grows the cloudage;

After the fragments transform into earth and sun and sky, Ilmatar begins to shape the earth beneath her feet as if it were clay. She forms the rocks, reefs and deep parts of the ocean. She makes the shores and headlands and forest pillars of the sky.  After this work, finally her labor begins and she gives birth to an old man, a magic singer named Vainamoinen. This story was in the north.

Farther south, I found another creation story involving a bird and an egg.  In the Slavic story Песни птицы Гамаюн, The Song of the Bird Gamayun, creation begins with a golden egg.  Inside this egg was the supreme God, the parent of all life on earth, from his body comes the sun, moon, stars and earth. However, the earth sinks beneath the surface of the ocean and cannot be found. The Supreme God sends a duck to search for it. Three times she attempted this.  The first trip took a year, and she came back with nothing. The second trip took two years, and still nothing.  But after the third trip, which took three years, she came back with a branch from the earth. The supreme God rubs the branch inside his palms with an invocation. The wind blew and the branch fell into the ocean, and the sun shone, heating the water.  As the ocean evaporated the earth emerged and the moon cooled it off.

In these stories of lost and found, the earth is formed. In the first story, the eggs break accidentally. In the second story, the egg follows the normal course of development. A circle inside a circle forms the egg, two lines without beginning and end, but both breaking.

There is another circular story in our cultural history, the Buddhist tale of karma. The word karma means action, the sum of actions in a person’s life (and past lives) and the results. In other words, what goes around, comes around:

Once there was a bhiksu [monk] who lived in the mountains and practiced sitting Zen. Every day at his noon meal he would give some of his food to the birds. The birds, therefore, always flocked around him. One day after the bhiksu finished his meal, he cleaned his teeth, washed his hands and picked up a pebble to toss. There was a bird on the other side of the fence where the bhiksu could not see him. When the bhiksu threw the pebble, it hit the bird in the head and killed it. That bird was reborn as a boar, which lived on the same mountain. One day the boar happened to climb a ledge above the bhiksu's hermitage and dislodged a boulder while grubbing for food. The boulder fell down and killed the bhiksu. The boar intended no harm. The boulder killed by itself.

The circles are linked vertically and horizontally. One circle, that of a person’s life from birth to death begins again at rebirth. The actions within this circle impact the lives of others. The intentional or unintentional action both circle into the world. According the Buddhist tale, “Doing good and setting one's sights on bodhi [enlightenment] is the behavior of one whose heart is awakened.” This tale shows that what comes first is not as important as what comes next.

Lönnrot, Elias, compiler.  The Kalevala: or Poems of the Kaleva District. Translated by Francis Peabody Magoun, Jr.  Harvard University Press.  Print c1963.  Another version is available as a free e-book from http://www.gutenberg.org/ebooks/5186.