Considering Emily: Poetry and the Spirit 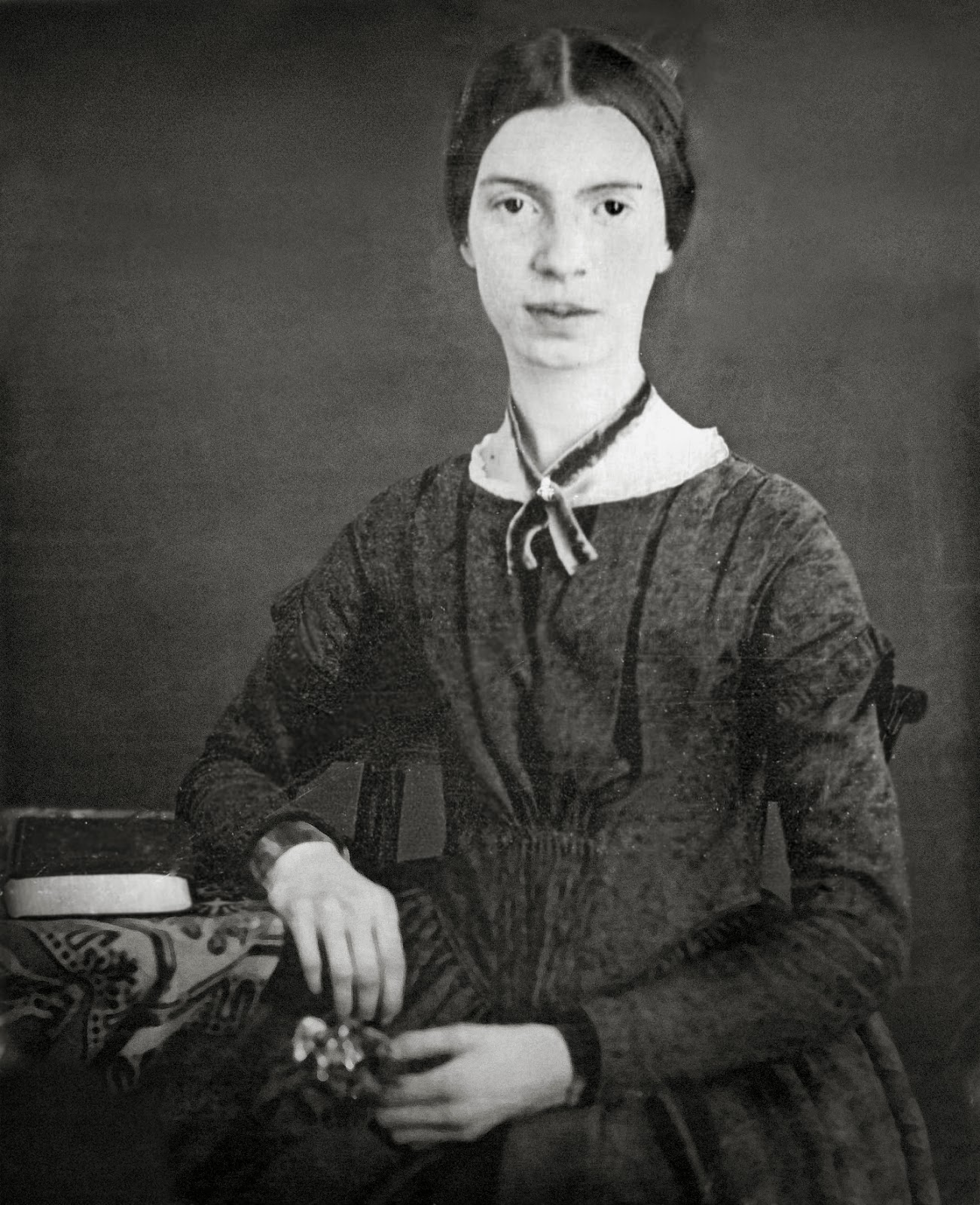 Poetry has the ability to evoke and invoke the spirit.  Emily Dickinson said to her friend Higginson:  "If I read a book [and] it makes my whole body so cold no fire ever can warm me I know that is poetry. If I feel physically as if the top of my head were taken off, I know that is poetry. These are the only ways I know it."  A poem becomes vivid and strong when it is grounded in the body:


Rowing in Eden!
Ah! the sea!
Might I but moor
To-night in Thee!

An ambiguity exists in this poem that allows it to cast more than one shadow. Mary Oliver has identified the ability to cast more than one shadow, to make multiple meanings, a characteristic of good poetry. The one to whom the poem is addressed is obscure, it could be a mortal or it could be an immortal.  In this ambiguity, the subject which could have very straightforward becomes figurative, becomes a metaphor.  The poet gains additional meanings.  Besides this, Emily Dickinson makes very effective use of repetition, rhyme, consonance and assonance (consonant and vowel sounds). Paul Valery says the difference between poetry and prose is physiological. The poem attends to meter, measure, and breath. "Wild Nights" has a definite, compact form. It's based on the liturgy, or the hymn stanza.  Emily Dickinson's work is distinctive and entirely her own--it reflects her individuality.

In addition, a good poem uses the visible image to give a glimpse of the invisible. She invokes.  In another poem, Emily Dickinson has made this quite clear and indisputable:


There is another sky,
Ever serene and fair,
And there is another sunshine,
Though it be darkness there;
Never mind faded forests, Austin,
Never mind silent fields -
Here is a little forest,
Whose leaf is ever green;
Here is a brighter garden,
Where not a frost has been;
In its unfading flowers
I hear the bright bee hum;
Prithee, my brother,
Into my garden come!

Emily Dickinson's work never stops yielding meanings. In this poem addressed to her brother Austin, she shows us her interior world, a world of spirit.  The only way to access it is through her vision, a poet's vision.  What we know of her life seems to be congruent with what we read in her poems.   From the domestic sphere, the small world, she evokes an immensity.

Nothing is more important than an individual poet's voice.  The word voice encompasses the word choice, images, and rhythm of speech.  A poem must evoke and invoke.   Economy of words is common to many poets.  But it is not just few words--each word carries much weight. The poet Lorine Niedecker addressed the aspect of condensed language in her poem, here:
A Poet's Work

Grandfather
advised me:
Learn a trade

I learned
to sit at desk
and condense

No layoff
from this
condensery

When the language is compressed, it is the same as when an atom is compressed. The unnecessary words are stripped. Spareness becomes a practice. Poems can be built from from smaller units, the phrases.  It all depends on the voice, of course, that individual style and rhythm.  It's best to show, not tell. Focus on image and action. Avoid adjective or adverb, except for the right one, sparingly.

In history, the 18th and 19th century poets seemed to focus on meter, rhyme, and rhythm. In the 20th century, we find a trend toward imagism characteristic of Ezra Pound (who was studying Chinese poets), William Carlos Williams ("so much depends upon a red wheelbarrow"), and others.  "No ideas but in things."  This line of Williams from his poem, "Paterson," came to signify the fact that images communicate volumes. Writers know that adding interpretation or explanations (hitting the reader over the head!) will kill the aliveness and beauty of a poem. This takes away the evocative quality and might insult to the reader.  Didactic poems are a drag. "In art it is not thinking that does the job,/ but making,"  said Johann Wolfgang von Goethe.  Images, story, figurative language, and patterns invite the reader to participate in the meaning.

Often, poets use techniques like juxtaposition or pastiche to create poems. We consider all elements, of course, every thing in a poem should be deliberate.  Among the elements, poets consider word choice, line length, line break, stanza break, form, and syntax. Parataxis is "a technique in poetry in which two images or fragments, usually starkly dissimilar images or fragments, are juxtaposed without a clear connection."   Haiku must be the ultimate example of this technique, although haiku has a precise structure and also gives a sense of time passing or the seasons.

Energy, friction and tension is another way to approach revision.  How can you develop greater energy or tension, between the lines or in anyway?  Some poets use opposites.  The beautiful poems of Lao Tzu reveal the Zen and Taoist fascination with opposites.

This poem by Lao Tzu was translated by Sam Hamill.
Beauty and ugliness have one origin.
Name beauty, and ugliness is.
Recognizing virtue recognizes evil.

Is and is not produce one another.
The difficult is born in the easy,
long is defined by short, the high by the low.
Instrument and voice achieve one harmony.
Before and after have places.

only one who makes no attempt to possess it
cannot lose it.
By exploring the opposites, the poet philosopher was able to hold paradox.  This poem by William Blake also creates a balance of opposites:
The Clod and the Pebble

Love seeketh not Itself to please,
Nor for itself hath any care;
But for another gives its ease,
And builds a Heaven in Hell's despair.

So sung a little Clod of Clay,
Trodden with the cattle's feet;
But a Pebble of the brook,
Warbled out these metres meet:

Love seeketh only self to please,
To bind another to Its delight,
Joys in another's loss of ease,
And builds a Hell in Heaven's despite.
Just a little note to those interested in naming literary devices.  The lines "So sung a little Clod of Clay,/ Trodden with the cattle's feet" is an example not of parataxis but hypotaxis.  The second phrase is not mere juxtaposition; it shows a causal relationship. Syntaxis is a more complex and long sentence structure that can be found in Milton's Paradise Lost.

Emily Dickinson employed the hymn stanza as her form. It makes sense that she would do this, considering her upbringing and her life experiences.  It's her voice.  Other poets use other types of forms: sonnets, villanelles, etc.  All forms, even "free verse" forms, usually develop a pattern of some sort by using parallel constructions, repetition and variations, visual arrangements on the page of text or white space.

Poems that do not have the pattern of measured lines are still likely to have a pattern recognizable to readers in our culture. Poems can be structured as lists, letters, prayers, brief narratives, elegies, odes, monologues, dialogues, and many other common, recognizable modes like definition, classification, comparison, contrast, cause, effect, argument that are also found in essays and fiction.  For example, the classification pattern was used in Wallace Stevens poem, "13 Different Ways of Looking at a Blackbird."  The comparison pattern was used by Lawrence Ferlinghetti in his poem, "Two Scavengers in a Truck, Two Beautiful People in a Mercedes."

Considering poetry and spirituality, I want to point to the anaphora form.  This list form is characterized by repetition at the beginning of the lines. The end of the line goes elsewhere. This type of form is common in the Bible, and it was also used by Walt Whitman and many others. An example of anaphora is this poem "Night Song" by Lisel Mueller:
Among rocks, I am the loose one,
among arrows, I am the heart,
among daughters, I am the recluse,
among sons, the one who dies young.

Among shoes, I am the one with the pebble,
among days, the one that never comes,
among the bones you find on the beach
the one that sings was mine
In poetry, to use a word more than once gives emphasis.  "Among" and "I am" occur several times in this poem, and it seems to underline the world's and the narrator's multiplicity.  The poem repetition does "intone."  It becomes very powerful.  In anaphoras, poets often use prepositions or conjunctions: if, because, when, since, etc.  Each of these words will create a particular effect.

To Love, To Sing

Michael Ryan, in his essay "My Favorite Poet: Emily Dickinson," describes her poems as her spiritual biography, the results of a lifetime of dedication to her craft and art.  "What she made in her poems, she used in her life. "When after a few years out of touch, Higginson asked her if she was still writing, she told him she had no other Playmate."  Ryan writes, "for her the relationship between art and morality was implicit not explicit, private not social, neither pious but enmeshed with gritty, difficult, daily life, and every crack and crease in their connections was open to exploration."

I also pay homage to Emily Dickinson. There are  many possible interpretations of her poem "Wild Nights."  Some like to think she had a love affair, and maybe she did.  Others like to think she was referring to a spiritual bliss.  Biographers portray her as a homebody, as shy and reclusive.  I think this poem best illuminates her relationship with poetry.

She wedded herself to her art. Many are familiar with the exhilaration of making something new,  and of staying up nights.  Poetry most certainly was "port" for her, the place where she was sheltered from the winds. Inside the discipline of creative work, there's freedom and opportunity to follow one's intuition instead of a formula,  a"chart" or "compass."  Writing and working in poetry is "rowing in Eden." Considering Emily, I can't conceive of a better place to moor.