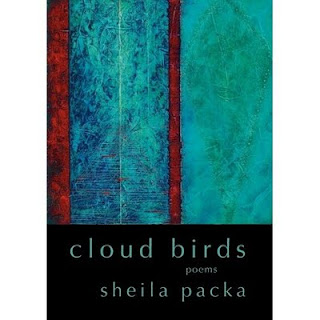 For me, this book of poems grapples with fear.  I've arranged the poems into three sections: 'bear,' 'wing,' and 'cloud.'  The poems in the first section are about encounters: fear of the wilderness, especially bears, fear of women, and fear of relationships. The pomegranate, the myth of Persephone, and the migration of Persephone between her husband in Hades and her mother enter into the book.  Some of the poems in Cloud Birds are about women moving through violence; all of the poems are about moving through fear.

This is not about victimization, but about learning how to walk through violence and fear and get beyond it. My grandmother on my mother's side survived spousal abuse. I had a brief marriage, at age 20, to a man who, on our honeymoon, kicked me because the suitcase was not packed correctly.  I have known so many who have suffered and even lost their lives to this violence.

The painting on the cover of the book by visual artist Cecilia Ramon is called "Refuge I/ Refugio I (in homage to Ana Mendieta).  Cecilia Ramon, the visual artist, migrated from Buenos Aires, Argentina. When she was young, she witnessed violence on the streets. During that era, many people 'were disappeared.'   The concept of refuge is apt.  Ana Mendieta was an important visual artist. She was born in Havana, Cuba, and she came to the United States at the age of 12 without her parents.  She became an environmental artist with striking work.  Click for info about Ana Mendieta, visual artist.  Her death was mysterious.  She died from a fall from her apartment window in NYC. Her husband was charged with murder, but acquitted. Perhaps she did commit suicide.  But that too is the extreme act of violence toward the self.  I wrote the poem "Spilled" for her, for many others, who don't survive.

The section, Wing, is a migration through the Iron Range and the places in northern Minnesota where I grew up and lived. The Iron Range is a place of iron and taconite mines. It was a working class culture--sexist, racist, and homophobic.  Drinking was a major preoccupation.  But it is also a beautiful landscape with people, native and immigrant, of great resilience and strength. This section has stories about love and about my parents and immigrant grandparents. They never achieved English literacy; my grandmother and I weren't able to converse across the language divide.  Some poems pay homage to my father; the first protector in my life and the first to threaten violence.  He loved me fiercely.  When one steps back from the family and looks into the landscape, one sees violence in nature, predators and prey in a relationship phrased as "the way life is."  I mull over these things.  In the section are poems about factory work and an underground mine, dangerous work with horrible health consequences.  Recently, studying cosmology, I read that the creation of the universe was a simultaneous creation and destruction. It's everywhere. There is every reason to have fear and every reason to live one's life fully.

The last section, Cloud, is a sequence of poems about dissolved boundaries: between lovers, between walls that one puts up, between the immigrant past and the present, between the self and the landscape. In this section, the poem Persephone speaks of returning. When my mother was alive, I went home to her a few times. When relationships were difficult. Now that she is gone, I continue to revisit her origins.

In order to overcome my own fear of bears (because I had moved into the woods and shared the landscape with several), I decided to write twenty one love poems to bears. This is the origin of the manuscript--and its end--the decision to love what I had feared.

Cloud Birds is published by Wildwood River Press and is available at your local bookstore, or at Amazon.com
Posted by Sheila Packa Poetry Blog

Read my new work published by Wildwood River Press ! These poems travel through mining excavations and waterways vulnerable to environmental...